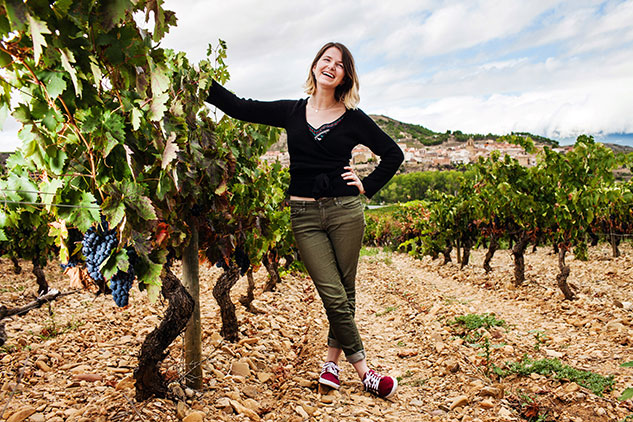 [Greetings From Logroño] by Dorrie Brueggemann ’15

When average American college graduates think of Spain, they likely imagine something similar to my experience studying abroad in Seville — flamenco and Moroccan-influenced architecture, sunshine, heat, paella and red wine. But Logroño, my home for the past year, is no Seville. Situated less than two hours south of the northern coast of Spain and with a population of just 150,000, Logroño belongs to a different Spain — the Spain of the north.

In northern Spain, we may not have paella, but we have plenty of red wine. In fact, if you’ve purchased a bottle of imported Spanish red wine recently, take a look at the label. There’s a good chance that it says La Rioja. La Rioja is the red wine-producing capital of Spain, and Logroño is its capital city.

I came here to teach high school English a year after graduating from Rice with a degree in cognitive sciences. I knew that I wanted something more after my semester abroad. I didn’t just want to study in Spain, or in any foreign country; I wanted to live there.

The landscape of La Rioja is covered in vineyards, and the biggest festival of the year is called San Mateo, a celebration of the “vendimia,” or the wine grape harvest. Logroño also is one of the first cities encountered by pilgrims walking the Camino de Santiago, a 1,000-year-old pilgrimage route across northern Spain. Between eating a lot of pintxos (tiny, delicious, elaborate dishes that are served at most bars) and sampling wine, I do find the time to work.

I came here to teach high school English a year after graduating from Rice with a degree in cognitive sciences. I knew that I wanted something more after my semester abroad. I didn’t just want to study in Spain, or in any foreign country; I wanted to live there.

Now, some advice about teaching English abroad: First, brush up on British English vocabulary and spellings, or you may find yourself falsely correcting a teacher in front of a class only to be told you don’t actually know your own language. Second, while the Spanish have a strong desire to learn English to compete in an increasingly English-driven world market, it doesn’t always feel that way. There were moments where I felt unsure of myself, like I was forcing my native language upon an unwilling population.

In the end, Spain has challenged me as much as my American accent challenges my students. I may not always feel sure about my next steps when I return to the States, but then I remind myself about that time my visa was approved by the surliest bureaucrat at Logroño’s Foreign Office — and I lived to tell about it. And I remember that I can take whatever life throws at me. — As told to Lynn Gosnell