Adriana Ramírez ’05 stood in the front of a small reading room in the basement of City of Asylum, a literacy center in Pittsburgh. She put a binder on a music stand and looked at the audience.

“I apologize. It’s going to get a little bloody,” she said. 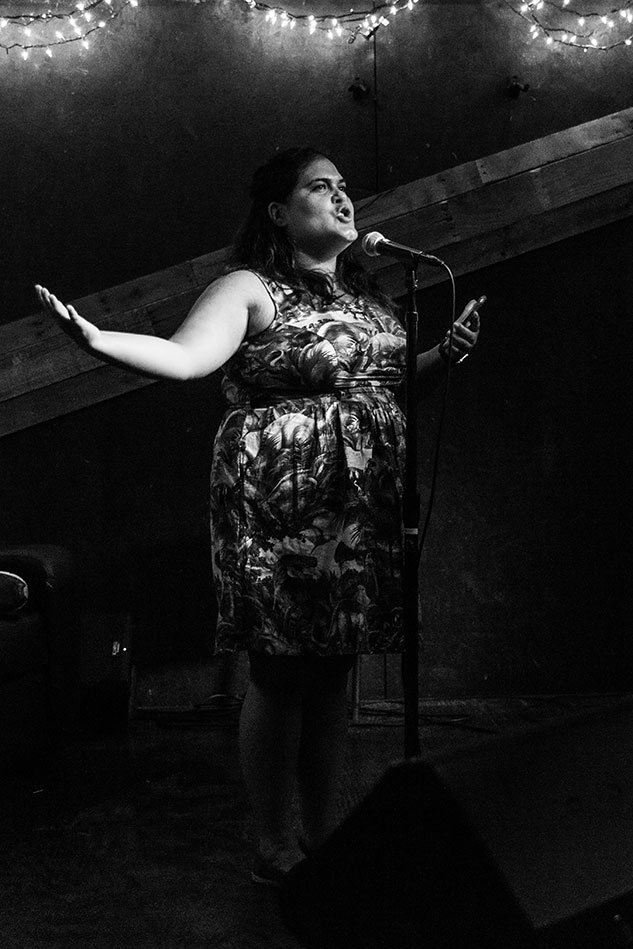 And it did — quickly. Ramírez read from her forthcoming nonfiction book, “The Violence,” which is based on the story of her family and the Civil War in Colombia during the 1940s and 1950s. She sketches out the brutality that was inflicted — one family member has her arm amputated; another loses his life.

“The Violence” will be published by Scribner in 2018, and Ramírez was weeks away from her deadline. The stories she tells, all oral histories from her Mexican-Colombian family, could be considered the Colombian version of “Angela’s Ashes.” But first she had to wrestle with the stories themselves. She’d hear a riveting story about how someone died, just to have someone else call it a lie. She tried to track down what song was playing on the radio on a given day, only to find that all of the radio station’s records were destroyed when it burned down in the 1970s. She needed time to sort out the stories and arrange the opening chapters. Earlier this year, she won the City of Asylum/Pittsburgh Prize, which bought her a much-needed, all-expenses-paid month of writing in Brussels.

“We were so proud to announce Adriana, because she has a unique voice and a strong trajectory as a writer — she is really committed to transforming Pittsburgh through the power of words,” said Silvia Duarte, assistant director of City of Asylum.

Ramírez’s love for writing started as a teenager when she wrote what she deprecatingly calls “emo poetry.” She also had a love for theater and sought out open mics to perform. When she moved into Lovett College at Rice University, she found a new opportunity for her love of poetry performance.

“A friend asked me to go to a poetry slam on campus. I ended up entering and getting third place. The next thing I know, I’m on the poetry slam team,” she said with a laugh. Ramírez helped turn the slam into an official campus club — RHAPSODY, which stands for “Rice Has a Poetry Slam, Oh Damn Yo.”

She hosted the slams in the black box theater in the basement of Lovett, which she developed into a working space for performances — she built the light box, directed and wrote plays, and built sets for the different productions. Off the stage, she wanted to see her writing in print, so she started writing reviews for The Rice Thresher.

“I walked out [of Rice] with a very well-rounded renaissance-style education that really gave me things to write about,” she said. The roots she put down continued to grow. Ramírez moved to get her MFA at the University of Pittsburgh, where she would begin “The Violence” as her thesis. Outside of class, she found Pittsburgh’s performance poetry group, Steel City Slam. She ended up running the group for the next decade. She met her husband, Jesse Welch, also a slam poet, and together they started a youth branch of the slam.

After earning an MFA, Ramírez taught classes at the University of Pittsburgh in creative writing, composition and literature, and later taught nonfiction at Carlow University. She also uses publishing for activism; she runs a small press with Welch to publish writers who might not otherwise be published, and she co-founded Aster(ix) with novelist Angie Cruz to publish women of color.

“The mission is to nurture a space where innovative works by artists, and mainly women of color, can live and be in dialogue with each other. We are both Latina women who wrote books. We care because if we don’t create spaces for writers like us, who will?” Cruz said.

In 2015, Ramírez won the PEN/Fusion Emerging Writers Prize for her nonfiction novella, “Dead Boys.” In 2016, she joined the Los Angeles Times as a book critic at large. Her writing and critiques, she said, work together. “In a way, the critic’s role is to demystify. My creative work is absolutely about how to demystify and trying to understand what’s happening.”

Ramírez still carries Rice with her in multiple ways — the most literal of which is an owl tattoo on the back of her left shoulder. Her old friendships from Lovett are still thriving; she sends Rice friends first drafts of her writing to read and critique. And as she gets known in the writing world for balancing her quick wit and warm personality with the grit of difficult subjects, she credits her education for helping her learn that edge.

“I love that I know how to read and talk about politics. I’m not just writing for the sake of writing. I have things to say.”