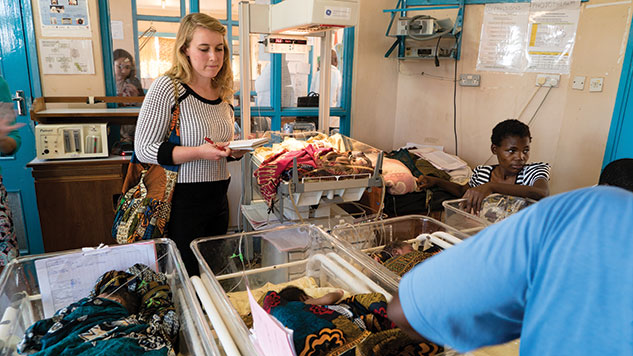 NEST360°, a visionary 10-year effort to save the lives of 500,000 African babies per year, is among four finalists for the MacArthur Foundation’s first 100&Change grant, the foundation announced in September. One grant winner will be awarded $100 million in December.

The 100&Change competition, which began over a year ago, aims to solve one of the world’s critical problems. The competition drew more than 1,900 applications from which eight semifinalists were selected last February.

NEST360°, an international effort by physicians, engineers, entrepreneurs and business leaders, is firmly rooted in Africa, a continent where more than 1 million babies die each year, mostly from preventable causes. The technology needed to save their lives has been available in the United States and most European countries for more than 50 years, but the equipment used in those countries is not built to last in the harsh environments of African hospitals.

NEST360° will optimize and scale a package of newborn essential solutions and technologies (NEST) for Africa, train health care workers to use NEST, work within African health care systems and markets to generate demand for NEST, and create a distribution network to provide NEST continentwide. Within 10 years, NEST360° estimates it could reduce newborn death rates by 50 percent and save 500,000 lives per year at a cost of $1.48 per birth, which is less than the cost of some routine vaccines. In addition, the team will work with African universities, medical schools and colleges to involve African engineers and entrepreneurs so they can sustain the change and transform other health sectors.

“Our team has worked together to improve newborn health for 12 years, and we have designed our program to be the lever that will catalyze continentwide change,” said NEST360°’s Rebecca Richards-Kortum, a bioengineering professor and director of the Rice 360° Institute for Global Health. “Our 100&Change activities will generate proof — and more importantly belief — that a solution to the persistent challenge of poor outcomes for newborns is within reach. Not only will this save the lives of 500,000 newborn babies every year, it will create long-lasting systems change that can help solve other health care challenges both in Africa and beyond.”