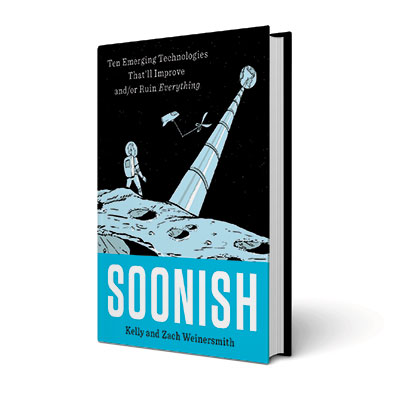 “There are amazing things happening all over the place every day, all the time, and most people aren’t aware of them,” write Kelly and Zach Weinersmith in their illustrated exploration of the scientific discoveries that will
(probably) shape our future. Their goal is to introduce us to the technologies that may or may not change the way we live — for better and/or worse — in the very near, or maybe slightly distant, future; that’s soonish, with an emphasis on the “ish.”

Kelly Weinersmith, an adjunct professor of biosciences at Rice, offers enlightening, and often hilarious, insights into cutting-
edge scientific advances, while Zach, a cartoonist, brings them to life in comics. Some of the fields they tackle include:

Cheap access to space: Being able to launch rockets into space more affordably could drastically alter life on our planet. For one thing, it could help ease climate change by enabling us to shield the Earth from sunlight — by launching screens into space. “One day you may look up to a friendly dark patch floating in the sky, protecting you from catastrophe,” the Weinersmiths write.

Robotic construction: Getting robots to build houses is harder than you’d think; the question is what sort of robots would work best. One giant robot? A giant swarm of tiny robots? Or a giant robot with a network of tentacles? Each variety comes with its own problems, as the Weinersmiths explain. “The big downside to having a tentacle bot build your house,” for example, “is that the tentacles get tangled.”

Brain-computer interfaces: Is it possible to improve human brainpower? Yes, the Weinersmiths say. “That’s easy. Exercise, eat right, lower your stress and study harder. Nah, just kidding. Can we improve your lazy-ass brain with computers?” The answer is “maybe.” From a thimble-sized implant that could increase our level of attention to magnetic stimulation that could improve our cognitive ability, there are a number of emerging technologies that might make us all smarter someday — soonish. 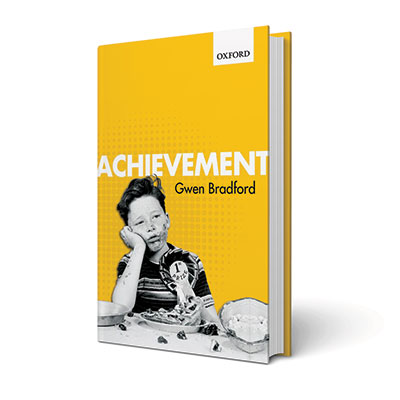 Does climbing Mount Everest count as an achievement, even though it doesn’t benefit society? What about the accomplishments of athletes who use performance-enhancing drugs? No doubt curing cancer would represent a monumental achievement, both in terms of difficulty and social benefits. But what if the discovery were a fluke that required no specialized training, no long nights in the lab — what if accidentally spilling Coke on cornflakes produced the panacea the world’s been waiting for? Would that still rate as an achievement?

These are the kinds of questions Gwen Bradford, an associate professor of philosophy at Rice, mulls in her book, “Achievement.” She uses a variety of engaging, imaginary case studies to support her hypothesis, “that achievements have two parts — the process and the product — where one of these parts (the process) is difficult, and competently causes the other part (the product).”

For example, tying one’s shoelaces isn’t difficult enough to qualify as an achievement — unless you only have one arm. But, Bradford explains, “… we might balk at saying that all difficult endeavors are achievements. After all, planning and carrying out a large-scale project to massacre millions of people would be remarkably difficult, but I think that many would hesitate to say that, for instance, the Holocaust was an achievement.”

What Bradford concerns herself with are the goals that people shape their lives around: “achievements with a capital A,” as she puts it. And those kinds of achievements have merit even if they aren’t actually well achieved. “Dedicating one’s life to trying but failing to find the cure for cancer might be a more worthwhile choice than a life filled with nothing but successfully tied shoes and peeled bananas,” she writes. 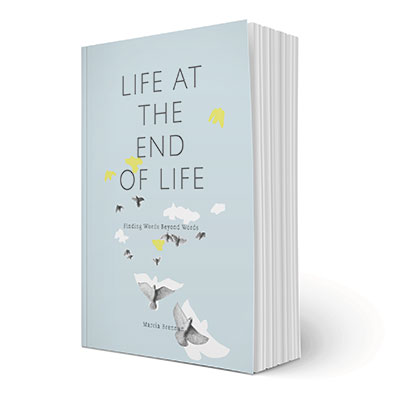 Life at the End of Life: Finding Words Beyond Words

As an artist in residence in the palliative care department of Houston’s MD Anderson Cancer Center, Marcia Brennan harnesses the power of poetic storytelling to help patients process pain, fear and grief. Her medium is language; she describes herself as a “scribe and a curator of thought,” helping people who are facing the transition between life and death construct poetic narratives to express their feelings and insights. “I ask questions and record the responses they inspire,” she writes. “Yet much of what I record is ineffable.”

Brennan is also a professor of art history and religious studies at Rice, and themes from her “day job” often intersect with her work in palliative care. In each field, she writes, she must answer the question: “How do we find language to describe states of being for which there is no language?” While Brennan bears witness to some of the most difficult moments of patients’ lives, “Life at the End of Life” takes a largely positive and affirming tone.

Many of the people she gets to know find peace as they approach death; some have profound epiphanies. But, Brennan notes, the process of dying — and people who are terminally ill — are often ignored in our society. “Just as the stories convey extreme wisdom and insight, they reflect the perspectives of people who … remain marginalized,” she writes. “Indeed, the end of life represents a monumental subject that, all too often, our culture cannot bring itself to look at.” This, she believes, represents a great loss for the living. 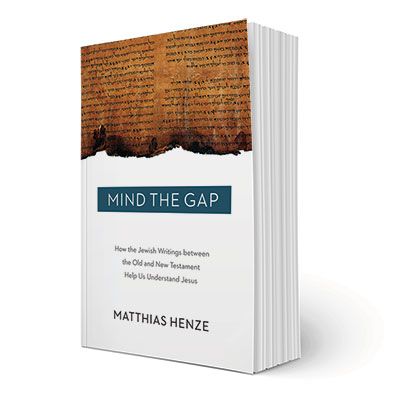 Mind the Gap: How the Jewish Writings Between the Old and New Testament Help Us Understand Jesus

To better understand what’s in the Bible, you need to read what’s not in it, according to Matthias Henze, the Isla Carroll and Percy E. Turner Professor of Biblical Studies at Rice. In “Mind the Gap,” Henze examines the Jewish texts written during the four-century period between the Old Testament and the New Testament. We talked to Henze about these forgotten Jewish books and why they matter.

A. The Bible has only preserved some of the books that were in circulation in ancient Israel. There were many others. The Jewish community in Egypt, for example, had a different collection of venerated books than those of the Jewish community in Jerusalem. Meanwhile, the Qumran community, which left us the Dead Sea Scrolls, considered some books authoritative that were not venerated in Egypt
or in Jerusalem.
The libraries of ancient Israel were much larger and more diverse than our Bibles today.

Q. Why is it important to read the literature that got left out?

A. Like any other religion, the religion of ancient Israel changed over time. Jesus lived in the first century CE, but the last books of the Old Testament were written in the fourth century BCE — that’s a gap of almost half a millennium. Israel’s religion went through some dramatic changes during those years. Imagine you’re hosting a visitor who knows nothing about the United States. She marvels at the culture and the technology, our high-rises and our ethnic diversity. To help her understand it, would you tell her, “Just read the Constitution, and everything will be clear”? That’s the modern equivalent of trying to explain Jesus’ Judaism by reading the Old Testament. The Jewish world of the New Testament would be unrecognizable if all you knew was the Old Testament.

Q. Can you give some examples of what changed during the gap years?

Q. What are we missing when we study the Bible without this context?

A. Most Christians today know very little about the Jewish world of the New Testament. This has led some to make exaggerated claims about the originality of Jesus. That’s the sad part — the long history of antagonism between Christians and Jews, much of which stems from the erroneous belief that Christianity has somehow replaced Judaism. Reading the ancient Jewish texts outside the Bible helps to correct this misperception and to understand Jesus within his proper Jewish context.      — reviews by Jennifer Latson