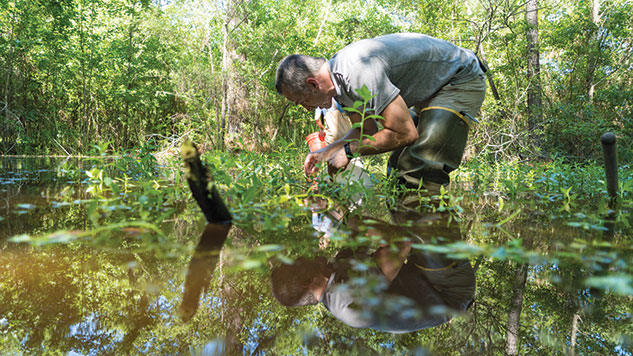 In one of the first studies of its kind, Rice scientists show that strong environmental “filters” —  in this case, predatory fish — cause dragonfly and damselfly communities to vary regularly from year to year and season to season. The results show how an ecological filter can help ecologists predict how biodiversity loss may impact specific habitats.

“Ecologists tend to think about biodiversity in space — we locate biodiversity hot spots and use maps to show how biodiversity varies in different habitats — but not in time,” said Volker Rudolf, associate professor of ecology and evolutionary biology and the study’s lead scientist. “In reality, biodiversity changes over time just as much and in many different ways.” Rudolf and his students collected and analyzed more than 18,000 insects, amphibians and fish during quarterly visits to 45 remote ponds in the Davy Crockett and Angelina national forests about 80 miles north of Houston.

Rudolf and his students collected and analyzed more than 18,000 insects, amphibians and fish during quarterly visits to 45 remote ponds in the Davy Crockett and Angelina national forests about 80 miles north of Houston.

The team investigated the extent that each pond varied, not just from season to season but also from year to year during the same season. In ponds that were associated with the presence of predatory fish like bass, the top predators brought an order to both the type of dragonflies that were able to live in a pond and how dragonfly communities changed over the seasons and years.

In contrast, the ponds that lacked fish showed far more diversity from pond to pond in the types of dragonfly species that were present, said Benjamin Van Allen ’14, the study’s lead author who earned his Ph.D. at Rice. “Looking at one fish pond throughout the year gives you a good idea of what happens in the rest of them.” Without a strong filter, the community of dragonflies in ponds that lacked fish “drifted” over time and did not go back to the same place each year, Van Allen said.

Rudolf said the data suggests that ecological stress brought on by overfishing, overhunting, habitat loss and climate change could have different effects on habitats with and without filters. He said the research shows how important it is for ecologists to account for such differences as they seek to quantify and conserve remaining biodiversity.

“These spatial and temporal components are really connected,” Rudolf said. “We can use simple rules to infer something about biodiversity and how it changes over time and space in various habitats and patches.”