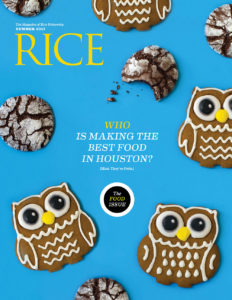 Your food issue reminded me of my food connections with Rice. I was a “grub” at Jones College from 1968 to 1969. One night our crew decided to go for a record in dish washing: 200 people sat down, were served, finished dinner, and we washed all their dishes in 18 minutes total.

Two years later, the placement office got me my first job after graduation — parking cars at Ye Olde College Inn across the street from campus. I had to wear a short-hair wig for that job. Later I worked at TGI Fridays in Houston, then in Shreveport, Atlanta and Dallas. Personal computers had just been invented, and I spent the rest of my career managing a computer help desk. There is surprisingly little difference between dealing with an irate drunk and explaining how to use a computer to a novice. It’s all about service.

My family members are all foodies. My wife retired after 16 years as CFO of Threadgill’s in Austin, my older son is a salesman at Sysco, and my younger son is a staff photographer for Saveur magazine in New York City. Thanks again for your magazine.

I have enjoyed your Summer 2017 issue of Rice Magazine that features foods. I even clipped out a couple of recipes. The food services at Rice are evidently doing a fine job and it takes me back to fall 1954/spring 1955 when I was a freshman at Rice. To conserve my college funds, I took a job in the kitchen of the Commons, which was the large dining hall (now part of Baker College, I think). I worked with the cleanup section, and we were called “slops” or “grunts” by other students whose parents could afford to pay full room and board.

With hundreds of boys and young men (no girls), the dining hall was noisy, and we slops did our part by banging around the dishes as we scraped and loaded them into the dishwasher. There was good camaraderie among us slops; we were supervised by the manager of the kitchen, an imposing and capable woman of middle years whom we called “Maw” Kelly. I moved off campus with a couple of classmates the next year, and we cooked for ourselves — mostly spicy hamburger meat. It is apparent that the service has been upgraded in recent decades.

How refreshing to see among Rice’s culinary luminaries Kristina Carrillo-Bucaram sharing the benefits of a vegan diet. I made the change years ago as a result of my work in animal law; however, I too have enjoyed health benefits that come along with this lifestyle change. And, like Carrillo-Bucaram, I assure others it doesn’t have to be all or nothing; she’s spot-on when she says, “one … meal a day makes a big difference.”

I recently read through the food issue and stumbled upon the article called “Rice’s Food (R)evolution.”

In 1995–1996, I was a sophomore at Will Rice and my friend Nate Byerley ’00 was a freshman. We were making personal efforts to eat foods that were vegetarian-friendly, organically grown and locally produced. We found the food options provided in our meal plans met none of the three criteria. Determined to be the change we wanted to see in the world, we approached and petitioned Central Kitchen to begin offering vegetarian and organically grown options at Rice’s colleges.

My recollection is that we had multiple meetings with both Marion Hicks and Mark Ditman in which we presented philosophical, environmental and social reasons for the Rice food services to provide these sorts of options to their student body. Ditman agreed to a provisional exploration of our requests at Baker College’s dining area and, as I recall, had us survey fellow students as to what they would want to try. We gathered their responses and presented a list of food suggestions to him and the Central Kitchen staff. And perhaps in this way, through our willingness to approach Central Kitchen and their willingness to engage our concerns, Nate and I were a small part of this 20-yearlong food (r)evolution at Rice.