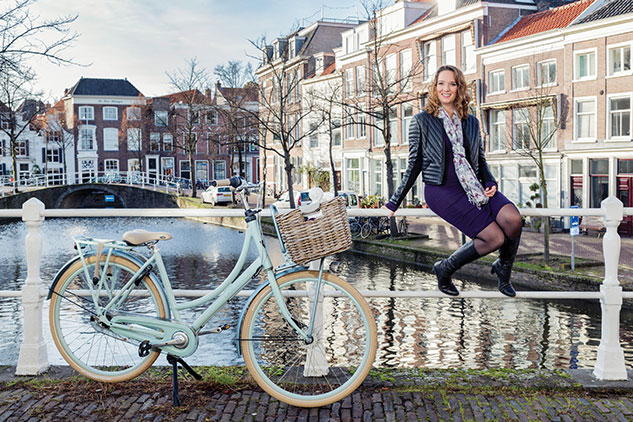 AT RICE, I STUDIED physics and had a passion for spaceflight. Little did I know where the distribution system would take me!

I first fell deeply in love with Europe during a Rice anthropology trip to Rome. After graduation, I was offered a scholarship to attend the International Space University in Beijing and Strasbourg, and I leapt at the combination of space engineering and cultural exchange. After a couple of intercontinental moves, I settled in the Netherlands and am now marketing manager for Science [&] Technology, a research and development company in Delft. I’ve married a Dutchman, learned the language, bought a house and settled in for the foreseeable future.

Delft is a university town full of bridges and canals, located between The Hague and Rotterdam. Best known in America for its pottery, local “Delftenaars” see their city instead as a center for technological innovation dating from the days of Antonie van Leeuwenhoek, the “Father of Microbiology.” Delft was also the birthplace and home of painter Johannes Vermeer.

Learning about the language and culture has been quite an interactive process. I credit Rice linguistic classes (which I once thought were a distraction from my real studies) for helping me pick up the language. For instance, I noticed that “lijk” was the Dutch equivalent of “ly,” and started attaching it to the end of words to create adverbs. It hasn’t always been easy, and I’ve made a few choice mistakes over the years — for example, introducing the minister of economic affairs as the minister of economic balls, because of a mispronounced “ah” sound.

My love of engineering has also served me well here. My geeking out about soldering, which I learned at Rice in Lego Lab, is a reason why the engineers here respect my questions and see me as a part of the team. Even my time in the MOB as public relations coordinator taught me to represent a wonderfully nerdy group to a larger audience. Now that I am employed on a daily basis defending and expanding investments in science and R&D projects, I feel like I am bridging the engineering communications gap with knowledge I picked up at Rice long ago.

Are you a young alum living outside the U.S.? Write us a letter and tell us about your day-to-day experiences: ricemagazine@rice.edu.