Gifted and Black: The Early Years

Gifted and Black: The Early Years 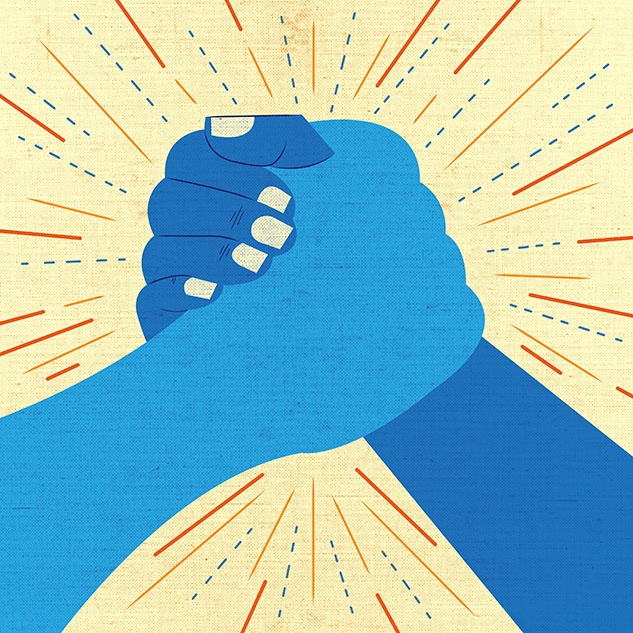 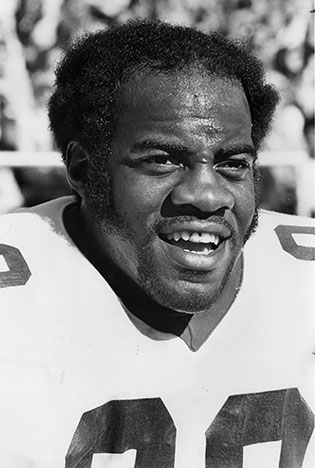 1968
Rodrigo Barnes ’73, Mike Tyler ’72 and Stahlé Vincent ’72 enroll at Rice, becoming the school’s first black football players. As student–athletes, these young men have a visible profile at Rice and throughout the Houston area. Barnes, who will go on to be drafted by the Dallas Cowboys and selected to the Rice Athletics Hall of Fame, is a bold, outspoken advocate for black students on campus.

1969
THE MEANING OF WELCOME
My welcome to Rice came in a lot of different ways from a lot of different people. There was the admissions committee with Bernard Giles, Alan Grob and all of the faculty members who worked so hard to get us here. I thought about Charlene Hunter Gault’s arrival to the University of Georgia, where there were protesters waiting for her. Well, there were people waiting for me, too, but they had luggage racks and moved me into Brown College. There was Ann Patton Green ’71, my freshman adviser. Karen Nikaido ’71 from Hawaii lived next door. She shared seaweed snacks sent from her grandmother. Nancy Rosenfeld [Thaler] ’71 practiced matzo ball soup recipes on me. Diane Ashford Sinclair’s ’73 mother came to Houston once a month, took Diane to lunch and always invited me. I now realize that might not have always been easy to do in the ’60s. Linda Williams was a senior and the fact that she could come here from Lovelady, Texas, and make it, that was wonderful. Faculty like Dr. Robert Cox supported me. I was in an 8 a.m. English class trying to say what I needed to say and a student laughed at me. He stopped class, pointed to the drop-add slips on his desk, and said, ‘If anyone does that to anyone else, get a slip, because you will flunk this class.’ There were no black faculty, but there were people that nurtured us — the ladies in the kitchen and those who cleaned, like Mrs. Alberta Nobles. Second semester, for a variety of reasons, I often slept on a bed at the end of the hall in Brown. Every morning Mrs. Nobles would come by and if my alarm clock didn’t wake me, she helped me get on my way. I graduated with honors, and who doesn’t like success? But more important, it wasn’t success under pressure and angst. It was success with joy.
— Jan West ’73
West is the assistant director of Multicultural Community Relations in Rice’s Office of Public Affairs. 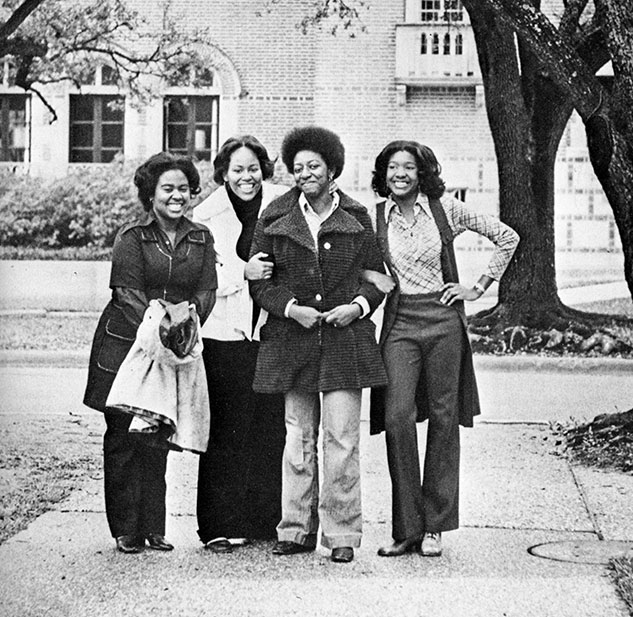 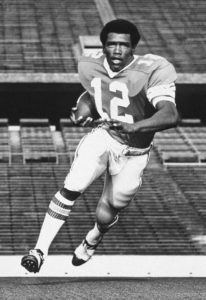 1969
A QUARTERBACK AND ROLE MODEL
Being a pioneer was something I didn’t sign on for; it wasn’t a goal. Then I started getting letters from teachers, then coaches, then players, then regular students who said, ‘You make us all proud. If you can do it, you’ve inspired all of us.’ That had a dramatic impact on me. All of sudden now you need to play well, you need to be a good student, you need to be a good citizen, ’cause you have a whole lot of people you don’t know who are pulling for you and using you as an example.
— Stahlé Vincent ’72
Vincent is the director of human resources for Cone Denim in Greensboro, N.C.

1969
Singer and civil rights activist Nina Simone records and releases “To Be Young, Gifted and Black,” a song inspired by the life of her friend Lorraine Hansberry. Weldon Irvine co-wrote the song. In 1973, Aretha Franklin won a Grammy for her recording of the now iconic anthem.

“To be young, gifted and black, Oh what a lovely precious dream …”

1973
FINDING A COMMUNITY
I grew up in the Third Ward. My mother was a first-grade teacher. My father worked for a couple of companies. Education was very important to us. … We were breaking new ground at the time, but that did not faze me. I did not seek to be actively involved in a variety of things [where] I would be the minority, so my primary social activity revolved around the other black students. It heightened my own awareness of my identity in a surrounding where there were so few of us. … I think it gave me a good foundation and prepared me for the next stages of my career. I’m pleased to have benefited by it and willingly share with others that this is my alma mater.
— Pamela C. Scott ’73
Scott was the first and only black woman in her class at Dartmouth’s Tuck School of Business. She worked in financial services for 30 years before opening her own business. 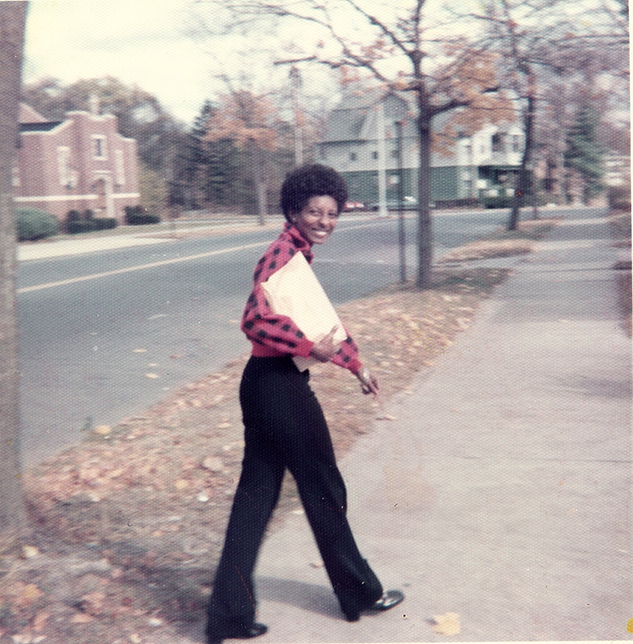 1974
Since 1974, Rice has celebrated Rev. Martin Luther King Jr. Day with an annual vigil and program. The King family, led by Coretta Scott King, began a national movement to honor Martin Luther King Jr. and his work in the late 1960s. (Roland Smith Jr., now an associate provost and adjunct faculty member at Rice, served on the commission chaired by Mrs. King.) In 1983, after years of setbacks and lobbying efforts, Congress signed a holiday for King into law. 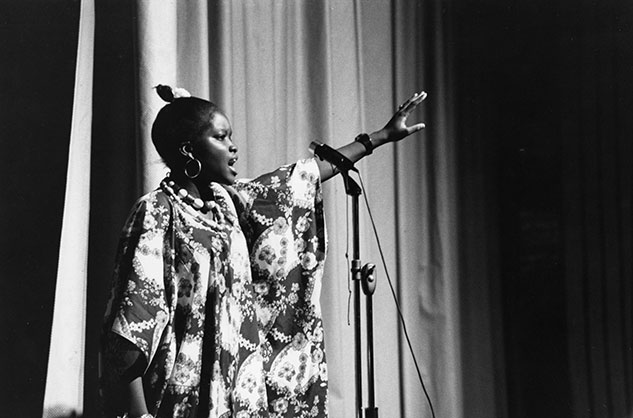 1974
STARTING THE BLACK STUDENT UNION
My sophomore year, there were enough of us — probably 60 — and we decided that we wanted to be activists and more engaged in what was taking place on campus and try to understand what we could do to make some changes that would be more positive for black students. So we decided we wanted to have a Black Student Union. We also wanted to have a place to meet, socialize and support each other. The university was not that open to the idea. One of the student athletes, Rodrigo Barnes, was very impressive in approaching the dean of students. We had our petition prepared for them to help them understand what that meant for us.

We ultimately were able to establish a Black Student Union that year. You saw there was some softening of the university’s position on doing something special for the union. Now it’s evolved into a much larger organization, the Black Student Association, or BSA.
— Regina Tippens ’74
Tippens has worked in sales and management at Procter & Gamble for more than 40 years.

1976
A YOUNG MOM GOES TO COLLEGE
I grew up in a small town in New Iberia, La. My mother was a maid. My father was a laborer in the sugar cane fields. I was impoverished; I just didn’t know it until I was able to look back. … In my senior year of high school, I became pregnant, and so I had to go to night school. But one of my teachers volunteered to teach mathematics to me in the daytime. This person was a Rice alum, and he encouraged me to apply to Rice, and I was accepted. When I came here, I was 17 years old and already the mother of a 6-month-old. I went back home every weekend to be with my daughter. I spent most of my time studying. When I walked across the stage to graduate, I just felt a sense of pride … it was an amazing feeling. I found that once I did have the Rice degree, the whole world changed. When I’m talking to someone about Rice, I tell them that I was one of the pioneers.
— Joyce Deyon-Sallier ’76
Deyon-Sallier is a CPA in Houston and is a mother of four and grandmother of 10.

1977
CHEERING FOR RICE
I started coming to Rice when I was in junior high, participating in a summer enrichment program. Although I stayed at home my freshman year, this proved to be disadvantageous, being away from the library and other sources of information. Upon moving on campus my sophomore year, I decided to run for cheerleader. I was elected the first black male cheerleader at Rice. Alumni, only a few I presume, were dissatisfied at the sight of a black male cheerleader. I returned to my room at Lovett one day to find bullet holes [from a pellet gun] in the window. This was investigated by campus security, and my family found out. … My dad and I talked, and I remained a cheerleader. The ultimate measure of an experience is whether you would do it again. Yes, I would.
— Mike Dunn ’77
Dunn is retired from the Texas General Land Office after more than 30 years. He lives in Austin. 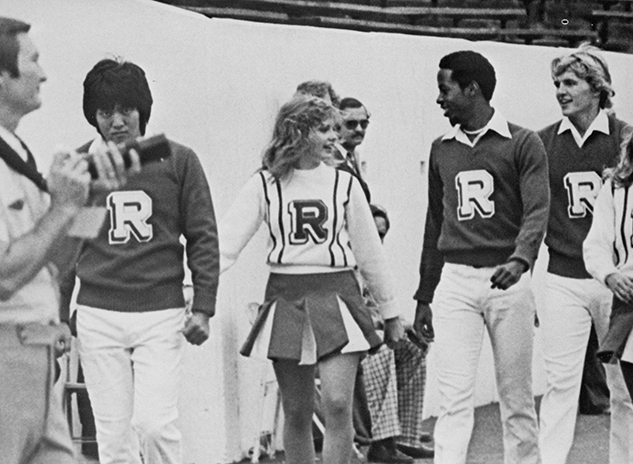 Mike Dunn, third from left, in 1976. Courtesy of Rice Campanile 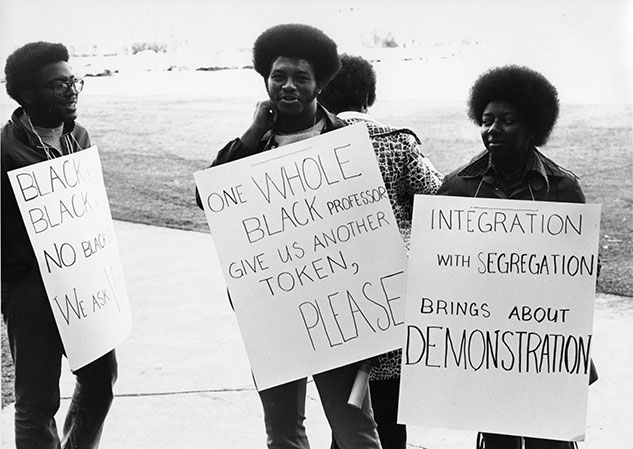 1978
“It was encouraging to discover that there are many different kinds of ‘smart’ among smart people. The key for each person was to discover the best applications of his or her variation of smart, before it was too late.”
— Johnella Franklin ’78
Franklin earned a B.S. in electrical engineering from Rice and an MBA from the University of Texas.

1978
Having a degree from Rice has opened many, many doors for me. To this day, when I say I went to Rice, people’s eyes get a little wider and they automatically think I must be a genius. Or at least pretty smart.
— Faith Stovall James ’78
James earned a law degree from the University of Texas after graduating from Rice and is a senior licensing executive at Microsoft. 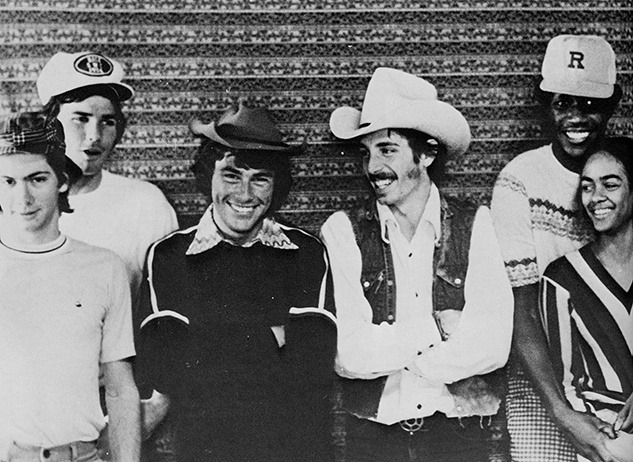