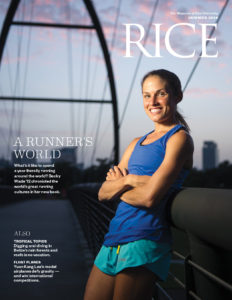 RE: STRANGER AS FICTION
Who could possibly have made the error on Page 7 of the same issue, saying that “Moving On” … is the SECOND book in Larry McMurtry’s Houston trilogy? “Moving On” (1970), “All My Friends Are Going to Be Strangers” (1972) and “Terms of Endearment” (1975). Aren’t these required reading in every Rice freshman literature syllabus? — Louis R. Hedgecock ’76 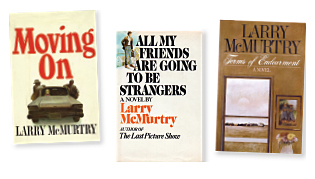 RE: STRANGER AS FICTION
It has been many years since I read Larry McMurtry’s Houston trilogy, but I am fairly confident that Bill Duffin was modeled on the late Jackson Cope, a brilliant Miltonist whose time in the English department overlapped with Larry’s time in graduate school at Rice. There are significant differences between Cope and the fictive Duffin, but no other English faculty member in those years seems to have been a likely model. — C. Earl Ramsey ’59

RE: STRANGER AS FICTION
Evan Casher, the main character in my 2005 novel, “Panic,” is a recent Rice grad who is a documentary filmmaker. In “Collision,” a man named Khaled who is working undercover in penetrating a terrorist group is nearly exposed when he runs unexpectedly into an old friend, a well-meaning young woman named Roula who is studying architecture at Rice.
— JeffAbbott ’85
Abbott recently joined the board of the Association of Rice Alumni.