It’s unusual to go to an art opening where you see floating heads and technicolor orca whales in the same space and come away describing it was a cohesive exhibit. However, on Sept. 22, “.GIF,” a pop-up exhibit curated by Felt Zine and Rice’s Matchbox Gallery, managed to pull it off.

As the name would suggest, the exhibit consisted of gifs — looped five-second clips of a video on repeat — projected onto the small gallery’s walls. With 55 contributing artists, the walls were constantly shifting, not only with the moving gifs themselves, but also with the interactions among gifs. The images were eclectic, bizarre and somewhat unsettling.

In one, a Simpsons-esque face morphed into a Picasso of multiple mouths and protruding hands. In another, the bottom half of a bisected horse’s body galloped across the screen. A cartoon dog skateboarded up and down a half-pipe on the opposite wall.

The gallery space changed while viewers filed in and out as music presented by Felt Zine’s founder, Mark Saab, thumped outside. Many visitors initially milled around with friends, laughing uncomfortably, pointing to certain gifs and murmuring admiringly about the more intricate geometric fluctuations. 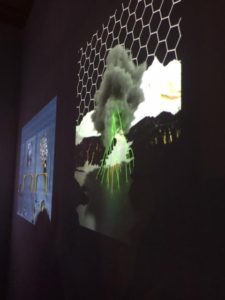 “The installation was a peculiar concept to implement, but also kind of genius given the limited space that Matchbox was working with,” said viewer Michael Robinson, a senior majoring in anthropology and film studies, “Instead of having the viewer move and interact with the art, the art changes on the viewer. The different length of loops also situated the viewer in a moment that would never be repeated.”

Part of the beauty of the exhibit was its hypnotic nature. Absorption of the gifs was a thoughtful experience for some attendees, while for others it was blissfully mindless. Gif cycles ended and began seamlessly as visitors stood riveted, colored light reflecting off of their faces.

About 300 people attended, including some traveling from other cities, said Caitlin Young, one of the co-curators for Matchbox. As quickly as it had been set up, the exhibit was dismantled. It seemed that the art had been displayed in the perfect setting and that its fleeting presence, instead of diminishing it, had made it all the more impactful.