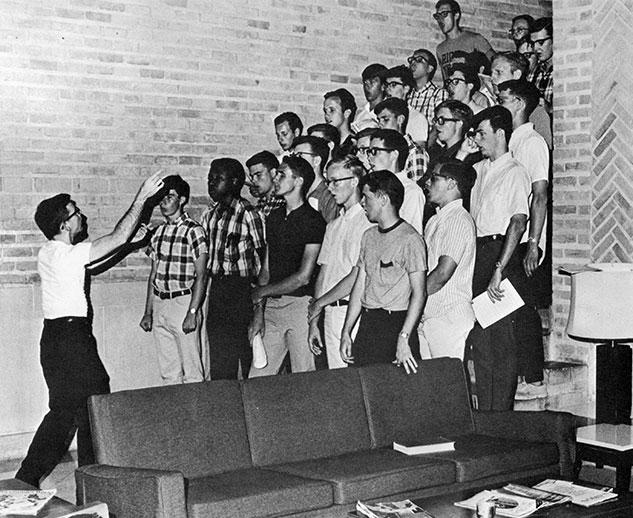 The early 1960s was a heady time for kids like Ted Henderson ’70. Space Age competition between the Soviet Union and the United States was in full swing, with President John F. Kennedy Jr. delivering his famous “moon shot” speech at Rice Stadium in 1961, challenging the nation’s best scientists to send a man to the moon by decade’s end.

The Manned Spacecraft Center (now Johnson Space Center) was founded in 1961 and opened in 1963, just a bridge away from Henderson’s Galveston home. Reared on National Geographic and Smithsonian magazines to which his father, a postal worker with a master’s degree from Texas Southern University, and his schoolteacher mother subscribed, Henderson thought a strong science-oriented university like Rice was a logical place to attend college.

“I was interested in the space program and biochemistry, and my parents really encouraged me to apply to Rice,” he said, “but my friends thought it was a waste of time.”

That’s because the year he graduated from high school, 1966, was only the second year that the university had accepted black students. And the first two black undergraduates had left the university.

But Henderson applied and got in. Once that hurdle was crossed, money was a factor. Though free for its first five decades, the university had begun to charge tuition in 1965. Just when he thought financial challenges had dashed his dreams of becoming an Owl, a letter turned up in the mail: He had been awarded a scholarship, which eased the financial burden considerably.

Henderson arrived on campus as one of only two African-American freshmen. (Linda Faye Williams ’70 was the other.)

“I’d heard lots of stories about [Charles Freeman and Jackie McCauley],” Henderson recalled. But he also found the campus surprisingly friendly. He remembers that Freeman’s roommate made it a point to welcome him to campus, which he found reassuring.

That said, he wanted to do well and complete his studies. “So I made sure I was on my p’s and q’s,” he said. At Will Rice College, he helped plan lots of social activities and parties, but he rarely had time to attend them. “Freshman year I had six labs, and it was really very hard. I spent a lot of time in my room or in the library studying, often until 2 or 3 in the morning,” he said. He earned a nickname at Rice, “The Bishop,” due to his study habits.

Although Henderson studied hard and did well, he realized that he gravitated toward history and anthropology in addition to math and science. “I thought about the Smithsonian magazines I loved as a kid and realized that I’d always been most interested in articles about cultures,” he said.

Henderson went on to graduate in 1970 with a degree in anthropology. He enrolled in the University of Hawaii at Manoa in Honolulu, where he received a grant to work with Professor Byron Griffith as a researcher on Hawaiian land division, trade, and the movement of goods and services.  “I was in the same program as President Barack Obama’s mother, though I didn’t know her on a personal basis,” he recalled.

Born and raised on an island off the Gulf Coast of Texas, Henderson fell in love with the Hawaiian Islands and still lives there. He continues to work, occasionally landscaping, giving tours and operating a taxi business. He looks back on his time at Rice as “challenging, interesting and supportive.”