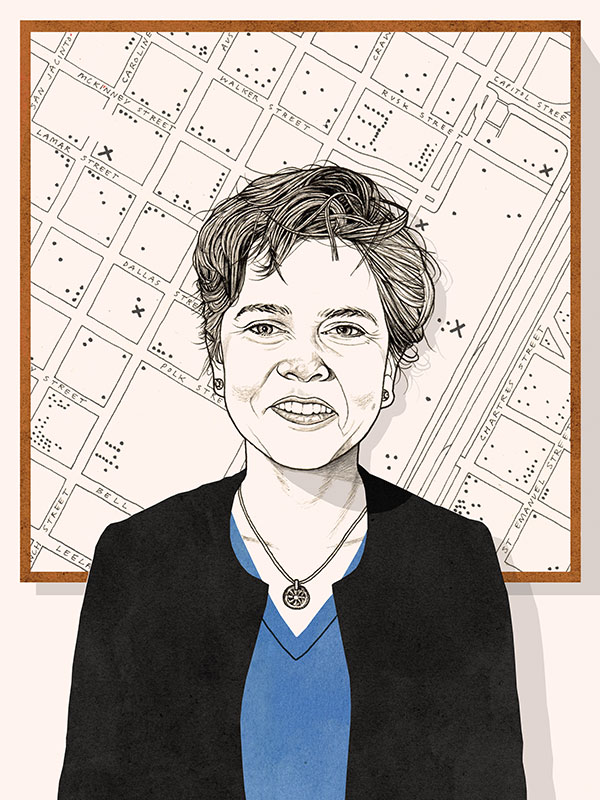 Marie Lynn Miranda arrived in Houston one year ago to serve as Rice’s provost. A Phi Beta Kappa graduate of Duke with an A.B. in mathematics and a Ph.D. in economics from Harvard, Miranda is a pioneer in the field of children’s environmental health and geospatial health informatics (the use of data-rich maps to study public health issues). Her work frequently takes her into communities directly affected by exposure to environmental toxins, both domestically and abroad. She and husband Christopher Geron have three children. We caught up with the busy provost in June, a day before she left for Malawi to learn about Rice’s global health projects.

Detroit Pride
I grew up in a neighborhood that had originally been white in Detroit and was transitioning to being black — and I was brown. Our family was neither one nor the other, nor at that time did people use the term “brown.” As a consequence, from a very early age I was given the opportunity to live and navigate in a multicultural world. It became second nature to me and has provided great advantages in the work I do.

Goan Heritage
My family is from Goa. When myparents were growing up, Goa wasstill a Portuguese colony, and I was the first one of my family born here in the U.S. Goa is a unique part of India: Everybody is Catholic; the first language is Portuguese; the language, the music, the food are all quite different from the rest of India. At family events, there’s always music, and Mirandas are dancers!

Her First Year at Rice
I spent a lot of time visiting with faculty and staff from across campus, touring every one of our buildings, spending time with students — both undergraduate and graduate — and just generally trying to get to know the university and its unique culture. People have been so kind and generous in helping to orient me. Creativity, positive energy and passion abound here. I have had the opportunity to brainstorm with people from across campus about new ways to bring people and ideas together even more fruitfully. I love this place — and I am really looking forward to year two.

Finding Her Life’s Work
I’m deeply interested in and motivated by questions surrounding the environment. Early on in my research I’d been applying my skills in the spatial analysis of data to questions about land management. But it didn’t feel like this was my life’s work. Then I got the opportunity to direct undergraduate programs for Duke’s Nicholas School of the Environment. When I looked at the curriculum, I discovered that you could earn a degree there without studying the justice dimensions of environmental problems. It is clearly the case that low-income and minority communities experience the environment quite differently — they have more exposure to environmental contaminants and less access to amenities. We decided to infuse these kinds of topics across the curriculum. For example, I introduced a module on childhood lead exposure, covering toxicology, differences in exposures and impact.

Lead Poisoning: Then and Now
When I was growing up, there was a huge public health campaign to address lead exposure. Until the recent broad national attention to Flint, Mich., many people thought lead was a problem of the ’70s: “We’ve solved it, and everything’s fine.” In fact, even before Flint, there were half a million kids with elevated blood lead levels. The Centers for Disease Control and Prevention has been unable to identify a level below which — aside from zero exposure — there’s [no risk]. We have aging infrastructure and housing stock, millions of housing units that still contain lead-based paint. Kids are still getting exposed to something that’s been a known neurotoxicant since 1898.

Disease and Data
There’s lots of energy and interest in bringing geospatial approaches into ongoing work at various organizations within the Texas Medical Center. For example, you could take electronic data for people with chronic diseases (like type II diabetes) and spatially locate it to better understand how the environment contributes to the disease, as well as to people’s ability to manage their conditions.

City Data
Kathy Ensor in the statistics department is leading the development of the “urban data platform” for Rice’s Kinder Institute for Urban Research. The whole idea behind the urban data platform is to gather layers upon layers of data that are relevant to urban issues — housing quality, traffic, air pollution, the location of community resources, all those sorts of things — and put them into a single integrated spatial data architecture. That becomes a resource for researchers across Houston and potentially the U.S.

Power of Maps
I don’t have any formal training in geography, but I personally find maps interesting beyond measure. If you sent me to a desert island and told me I could have only one book, without a doubt I would pick a good atlas. A cartographically well-designed map is a thing of great beauty.

In general, East Africa feels like a second skin to me. There are a lot of Goans in East Africa! When I went to Uganda for the first time, it was the first time anyone in my family had been there since some of my relatives were driven out by Idi Amin.

If you sent me to a desert island and told me I could have only one book, without a doubt I would pick a good atlas. A cartographically well-designed map is a thing of great beauty.

Everyone’s Talking About:Campus Diversity
In terms of students on campus, we’ve made a lot of progress in diversity, and we’d like to make more. Our staff is also quite diverse. The place where we have a lot of progress to make is in our faculty. We’ve made a number of hires in key positions, who we believe will play a real leadership role in our efforts to further diversify the faculty. Over the course of my first year as provost, we had a discussion about faculty diversity — what you need to be doing in the pipeline, in the stage of recruitment, in retention, for example. So there have been individual faculty hires, but also this question of what is the across-the-board program to make us more successful.

Favorite Thing in Her Office
That photograph of a dragonfly. When it appeared in Science magazine, I wrote the photographer and asked if he would send me a large print of it — I just loved it. There’s a tessellated pattern in the dragonfly wing; these patterns are special to people who do spatial analysis. The colors and the light reflecting off the wings, the details on the body of the dragonfly; for me, it’s kind of like a map, and it is a thing of great beauty. — LYNN GOSNELL