Reflections on the Revolution

Reflections on the Revolution 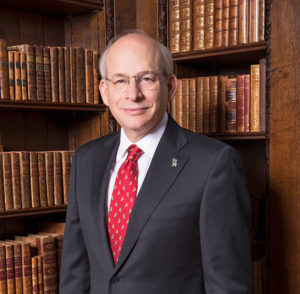 I AM WRITING THIS COLUMN ON JULY 4th — the 240th anniversary of the formal adoption by the Continental Congress of the Declaration of Independence. It’s a magnificent document, a document that has influenced history through the success of the American republic and through the importance of the ideas upon which it rested.

Which of course got me to thinking about Rice and higher education (but almost anything does). The study of history and the study of ideas (and, of course, the history of ideas) have always seemed to me to be among the most defining attributes of a university. Because history is indeed important, and the ideas that emerge from history are important, both are deeply contested in a world in which physical and ideological conflict seems to be the norm.

The birth of our republic (Amexit, if you will) was swathed in conflict — and not just the conflict with the British. The contradictions and ambiguities in the views and expressions of our founders continue to fuel disagreements to this day. To take one example, the Declaration of Independence is suffused with references to God, the Creator, the “Supreme Judge of the World” and “Divine Providence.” And yet the Constitution contains not a single such reference. Thus we continue to disagree deeply about the role of religion in public life and public policy.

Our republic was also born amid conflict over slavery. And although the declaration may refer by implication to slavery (through a reference, recently discussed in a New York Times op-ed, to the incitement of “domestic insurrections”), the Constitution contains the odious suggestion that slaves (referred to only as “other persons”) should count as three-fifths of a person. Our founders had the chance to address the implications of their principles for slavery and failed to do so.

Because history is indeed important, and the ideas that emerge from history are important, both are deeply contested in a world in which physical and ideological conflict seems to be the norm.

That does not eliminate the importance of the American achievement. It did, however, take nearly another century to abolish slavery, and to this day we struggle to realize fully the ideal of racial equality and justice. History and a clear understanding of the ideas that have emerged over time must inform our discussions. It is not only, as George Santayana said, that “those who do not remember the past are condemned to repeat it” (a sentiment, like the title of this essay, also attributed to Edmund Burke), but that those who do not understand the past — and its influence on the present — are unlikely to find enduring solutions to our problems or the common ground on which to debate them.

As I was contemplating the events of two centuries ago, I was also struck by a more recent event, namely the passing of Elie Wiesel — a Holocaust survivor, recipient of the 1986 Nobel Peace Prize and renowned writer. I remember precisely when I read his book “Night,” which recounts his experience in the concentration camps at Auschwitz and Buchenwald. I was 16 and on a flight to Frankfurt to attend my junior year of high school in Braunschweig, Germany. It was an overnight flight, but I stayed up reading Wiesel’s book. I felt somehow it was my responsibility, particularly being Jewish, to arrive in Germany conscious of this piece of history.

These horrors had occurred three decades earlier, and some of the people I would meet would have been involved in some way. During my stay and subsequent trips, I visited at least a half dozen concentration camps, ranging from Auschwitz, which was preserved as liberated, to the sanitized fields of Bergen-Belsen. It seemed essential to me that this knowledge (and more) should form part of the foundation for this engagement.

That historical knowledge did not diminish the deep affection that I developed for Germany as a result of my experiences there. My interest and experience in Germany form part of the background for my broader interest in religious tolerance. Out of the Holocaust emerged new ideas, particularly among university scholars, supporting a new view of human rights and the development of a new international law to protect those rights. And while those ideas and laws have not eliminated the terrible abuses of human beings that we observe daily in the news, I believe they have diminished them and changed how we respond to them.

In so many of the contentious debates of our time, history, philosophical ideas and cultural chasms lie at the heart of our disagreements. Universities play a crucial role in fostering this critically important examination of history and social ideas. We hear today much discussion of the humanities, and some question why we should continue to study them. There are a wide range of reasons why we must, including the basic fostering of creativity. And without such disciplines as history, philosophy, religion and the study of other cultures, we would be far less well positioned to understand the implications of history for us today, or how to build upon that history to realize the most fundamental values and aspirations of the evolving American republic.