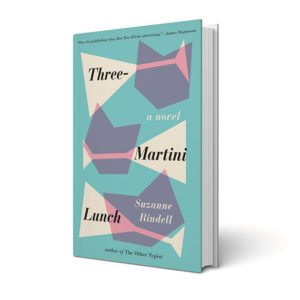 Rindell worked for several years at a Manhattan literary agency, during which time she wrote her first novel, “The Other Typist.” Her second, “Three-Martini Lunch,” follows a trio of characters whose literary ambitions parallel her own, although during a different era. The book is set in the late 1950s, and the three young protagonists are vying to establish careers as writers and editors in the face of institutionalized sexism, racism, anti-Semitism and homophobia. Rindell, no stranger to multitasking, is now working on a third novel — and pursuing a Ph.D. in American modernist literature at Rice. 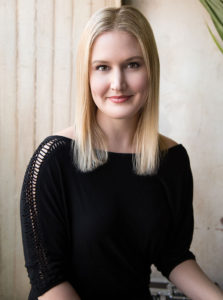 Your characters must overcome considerable obstacles as they pursue their literary ambitions — especially related to race, gender and sexual orientation. Have those issues disappeared from today’s publishing world?

Unfortunately, the answer is no. Things have changed, insofar as it used to be mostly men and now you see women in the business, but publishing still suffers from an overwhelmingly obvious lack of diversity. It’s somewhat falsely encouraging that they’ve finally let women into the biz, because there remains a significant gendered pay gap. So in some ways, these women make up a cheap, educated workforce — which is kind of depressing when framed as such.

You wrote your first book early in the mornings and late at night, bookending (pun intended) what must have been hectic days at the literary agency where you worked at the time. How did youpull that off?

Writing is more of a compulsion than anything else, so I’ve always found that it makes time for itself — it squeezes itself in or else steals time from some other corner of your life. (Goodbye, eight hours of sleep!) At the literary agency, my entire day revolved around answering one question, over and over again: What makes for a good book? So I think that only added fuel to the fire. During the day, I’d work on answering that question by helping other people with their books. And in the wee hours, I was trying to answer that question by writing the manuscript I was hoping to find in the slush pile.

What made you want to pursue a Ph.D. in literature?

It’s funny, I went into the program thinking one thing, and now I think another. I went into the program with the specific goal of becoming a tenure-track professor. I’m not sure that’s exactly the right fit for me anymore, and at the same time I think my Rice education is more important than ever. It structured my engagement with literature in a larger way; I believe it’s what keeps me on the “literary” side when I toe the literary/commercial line. I think a lot of people would say, “If you were going to be a novelist, why wouldn’t you have gone to a creative writing MFA program?” But I don’t think that would have served me as well.

Why did you choose Rice for grad school? What is the focus of your studies here?

I was drawn to Rice because the English department supported their grad students not only with the obvious — funding — but also with the idea that a grad student ought to take an active hand in shaping his or her specific path of study. Working on my dissertation actually sparked the idea for my first novel, “The Other Typist.” I’d been digging through everything to do with women in the Jazz Age when I found an obituary of a woman who’d worked as a typist in a police precinct during Prohibition. I thought, “Well, her life must’ve been interesting!” and the novel just started writing itself. Now I’m returning to work the same ideas through in an academic manner.

Is it jarring to switch between fiction and academic writing? What are the biggest differences between those worlds?

I think of it in terms of “show” or “tell.” Academic writing is “tell”: You’re supposed to argue your point with precision and transparency. Fiction is “show”: If you do your job right, you present readers with a sensory experience and invite them to construct the narrative, synthesize information and draw conclusions in their own brains.

Any chance that a future novel of yours will include a character who is a Ricestudent/alum/professor?

Extra dirty. I drink plenty of wine, but martinis are serious business. I always have to water it down with loads of olive juice.