By Sandra Millers Younger  •  4 years ago

Last April, a small group of expert model airplane builders — competitors in the rarified world of indoor free flight — gathered in a Romanian salt mine to put their delicate creations to the test. Yuan Kang Lee ’92 was there to defend his world championship title, but first he had to launch a comeback.

“ONCE YOU HAVE TASTED FLIGHT, YOU WILL FOREVER WALK THE EARTH WITH YOUR EYES TURNED SKYWARD, FOR THERE YOU HAVE BEEN, AND THERE YOU WILL ALWAYS LONG TO RETURN.”  — Leonardo da Vinci 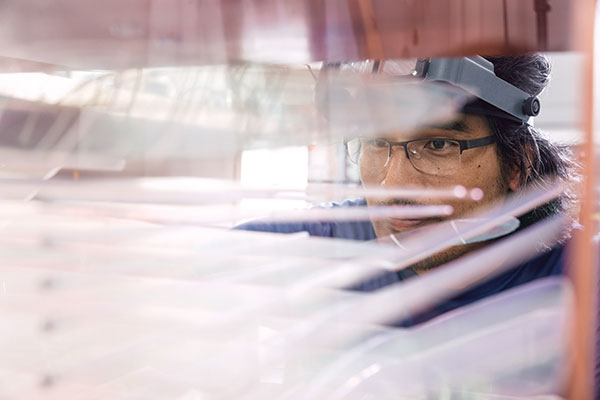 YUAN KANG LEE COULDN’T CATCH A BREAK.
He’d traveled all the way from California to Romania to compete against the best of the best in his sport. But the reigning world champion at the highest level of indoor free flight kept running into one setback after another.

The two model airplanes he’d designed, engineered and built in his garage workshop at home in San Diego — shimmering, gossamer creations made to soar higher and longer than any others — weren’t flying worth a nickel, and he couldn’t figure out why.

Lee spent all three pre-competition practice days fine-tuning his models, adjusting the wings, the tail, the rubber band engine that powers each flight. All to no avail.

Finally, he decided to use his backup plane, a third model he’d never flown high enough to win a world championship. Lee’s flurry of last-minute modifications left no time for extensive test flights.

He’d arrived at the competition site, an abandoned underground salt mine near the town of Slănic, feeling confident in his workmanship and flying skills. Now he had no idea if his only remaining model would perform well or not.

There was only one way to find out. When his turn came, Lee paid little attention to the watchful audience of bundled, ski-capped competitors and participants seated in folding chairs all around the perimeter of the enormous, dimly lit space. Focusing only on the flight ahead, he carried his model out to the floor of the cavern, opened his hand and let it fly. 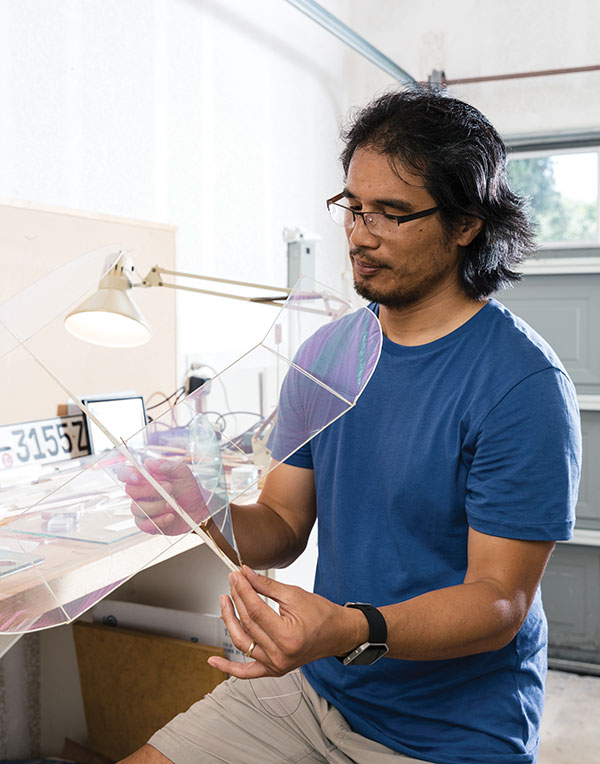 Lee in his garage workshop. Photo by Justin Galloway

DRAGONFLIES IN SLOW MOTION
A free-flight model plane is a thing of beauty, a happy marriage of barely there transparent film and spaghetti-thin strips of the world’s lightest balsa wood. A long, thick rubber band, wound a precise number of turns to produce a perfect climb and long, leisurely flight, powers its propellor.

Hold this work of art in your hand — carefully, very carefully — and you can barely discern any weight at all: less than a dollar bill. Let it go, and it scoffs at gravity, floating like a cloud, untethered and uncontrolled, until it’s good and ready to settle gently back to earth.

Imagine a silent squadron of these fanciful creations, all flying high and free above you, like a swarm of giant dragonflies in slow motion. Whichever one stays afloat the longest wins the round. Whichever amasses the most total flight time over three days of competition clinches the championship.

Sometimes the delicate models collide or crash land. Sometimes a nervous competitor tears a wing or crushes a tail.

All of these calamities and more befell Lee during last April’s biennial world championship competition in Slănic’s old salt mine, now a tourist attraction, prized by free flyers for its still air and 180-foot-high ceiling.

“Everything that could go wrong did go wrong,” Lee said. But Lee’s easygoing personality, Zen-like patience and uncommon ability to focus, even under stress, gave him an advantage, keeping him grounded even as he willed his plane to soar. 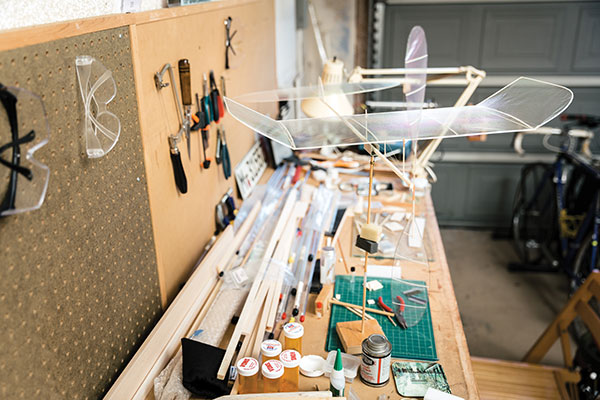 One of Lee’s float planes under construction. Photo by Justin Galloway

CRAZY ABOUT AIRPLANES
From his boyhood years in Cleveland, building plastic and radio-controlled models on his own, Lee was “crazy about airplanes.” He’d hoped to study aeronautics during his undergrad years at Cornell, but his traditional Chinese father steered him toward fields he thought offered better job prospects. Lee dutifully took his father’s advice and studied electrical engineering but never lost his fascination with aviation.

After completing his graduate work at Rice — an M.S. in 1992 and a Ph.D. in 1998 — Lee further honed his research and problem-solving abilities while working as a systems architect, first during 11 years at Texas Instruments and later at a San Diego cellular communications startup he launched with Chaitali Sengupta ’98, another Rice Ph.D. Since selling that company, Lee recently joined Fitbit as an embedded systems engineer.

“From very early on in my career, not only could I see the deepest and most detailed parts of the problem,” he said, “I could see the bigger picture.”

His focus came back to aeronautics six years ago, when his daughter’s science teacher asked him to coach a Science Olympiad team. Lee had a blast working with the middle schoolers to build and fly rubber-band-powered model planes. “Once I helped the kids, I was kind of hooked.”

With a little research, Lee discovered a global community of competitive but congenial aficionados who staged high-performance competitions in “indoor free flight,” a pursuit governed by the Fédération Aéronautique Internationale (FAI) Aeromodelling Commission. Considered both a hobby and a sport, this elite level of aeromodelling demands a combination of engineering, fine craftsmanship and wily strategy — a blend of talents seemingly tailor-made for Lee.

“I need to be solving problems,” he said. From his home garage-turned-workshop, where hand tools, bottles of glue and bits of balsa wood clutter every horizontal surface, came sophisticated designs that stayed aloft longer than anyone — even veterans with decades of experience — had thought possible. He advanced quickly through the entry-level classes and began to compete in and win regional and even national competitions.

It can take anywhere from 25 to 130 hours to build a free-flight model, depending on the builder’s standard of perfectionism. Lee spends 40–50 hours in his disheveled garage creating each of his planes. Although some of his colleagues keep impeccable work spaces, a habit Lee’s wife wishes he would emulate, his work space suits him. “At certain levels, my mind’s a mess, too.” 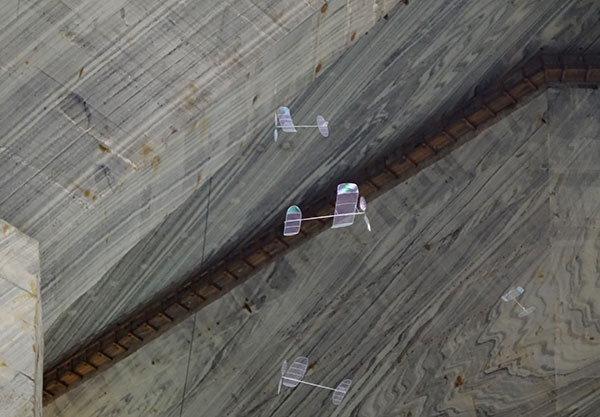 FLOATING TO THE TOP
And then in Slănic, Lee surprised everyone by coming out of nowhere to clinch the top trophy. Fueled by his lifelong passion for airplanes, the talented newbie had discovered and exploited previously unimagined opportunities for improvement in model design.

“Now and then during the competition, I felt some deep panic, but it was momentary,” he said. “I was really driven by my love of these planes and the joy I get out of flying.”

Debuting later this year, “Float,” a documentary film, will revisit Lee’s winning performance at that 2014 event. Seeing the transparent, diaphanous model planes in flight, and the obsessive devotion of the competitors who build and fly them, drew the attention of independent filmmaker Phillip Kibbe. 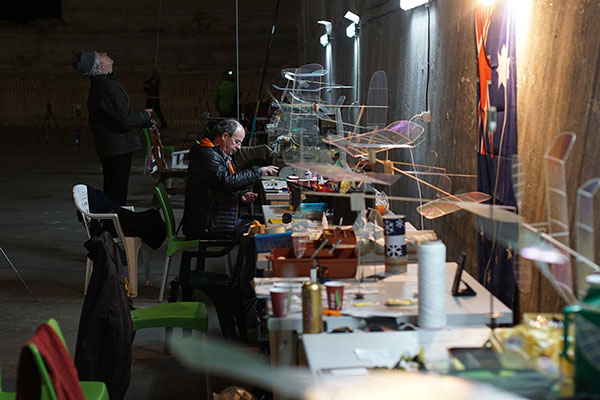 A competitor works on a plane in Slănic. Photo by Jake Palmer

“At first, it was a purely aesthetic thing,” Kibbe said, “but when I went to a competition and met the guys who do this, I realized it had a story to it.” Kibbe expected a short project, just a few months from start to finish. Instead, he ended up spending years filming F1D competitions in Japan, Argentina, England, Serbia and finally Romania, where he captured the 2014 World Championship.

“Kang made our story,” Kibbe said. “The guys who fly these models wait decades for a chance to win the world championship, and then this new guy shows up, and all of a sudden he’s won.”

Perhaps no one was more amazed than Lee himself. He’s still not sure how he managed to pull off such a coup so early in his F1D experience.

“Maybe it was my training in engineering, which was all about getting as deep an understanding as possible by looking at a problem from every angle,” he said. “My mind was often thinking about the mystery of ‘How do I get that next 5 percent of performance?’”

It turns out a huge piece of the puzzle is how to get the most energy out of the rubber band used in the model’s “engine.” Lee keeps his extensive collection of rubber bands in a dorm-sized refrigerator, each in its own tiny manila envelope, covered with notes to remind him when he used it, how tightly he wound it and how long it kept the plane aloft.

“I was very surprised [to win], especially because what I did then was chump change compared to what I’ve learned since,” he said. “I was fortunate; at that time, chump change was good enough.” 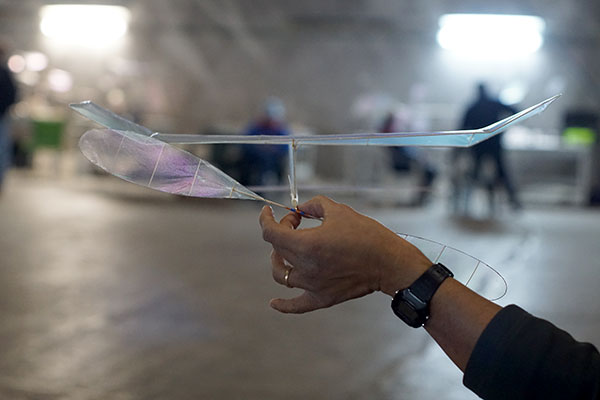 FLYING WITH LOVE
Last spring, Lee knew it would be different. His eye-popping performance in 2014 plus subsequent rule changes (shorter rubber bands to curtail flight times and keep competition on schedule) had inspired everyone to up their game. What worked before wouldn’t be good enough in 2016.

Still, Lee felt ready — until his top two models failed during practice. Setting out that first day of competition to defend his title with an untested backup plane, his confidence had dissolved.

And then he got an email from his daughter, Miranda Lee, an incoming Rice freshman, who will join her older sister, senior Olivia Lee, on campus this fall. It was Miranda’s middle-school science project that had introduced her father to indoor free flight.

“I’m so proud of you,” she told him in the email. “Fly with love.” Lee recognized an echo of the advice he’d given Miranda before each of her lacrosse matches. “Play with love,” he’d tell her. “Love of your teammates. Love of the game.”

It wasn’t until the third (and last) day that Lee erased his shaky start with the best flight of the competition. “It went exactly as planned, flew 5 feet below the ceiling, and it stayed in the air forever,” he recalled.

This stellar round brought him within 20 seconds of the leader. But while weighing his model for the final round of the competition, Lee encountered more bad luck: a piece of the scale fell off and ripped the plane’s wing.

He took a deep breath and told himself to stay positive. By the time he’d repaired the damage, the leader had already flown. Lee now knew exactly what he needed to do to win. He prepped his model for a conservative flight, just enough to beat the leading time without risking further damage, and aimed it for the heights.

Twenty-six minutes later, as Lee’s plane drifted down gracefully from an apogee of 180 feet, everyone stood watching, eyes on the clock. Would the reigning champion’s plane fly long enough to win again?

Fifty feet from the ground, the outcome still wasn’t clear. Ten feet, and it looked possible. But not until 5 feet from touchdown did Lee secure a second world championship title, with a final round time of 26:55. While a handful of others have won more than once in the event’s 55-year history, Lee’s record of winning his first two international competitions is unprecedented.

“It was wonderful,” Lee recalled. “I was at peace even before it touched down, because I’d made up my mind that it was not the results that mattered. I told myself, ‘I’m going to do it for the love of it.’ And I really did.” 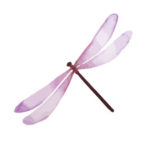 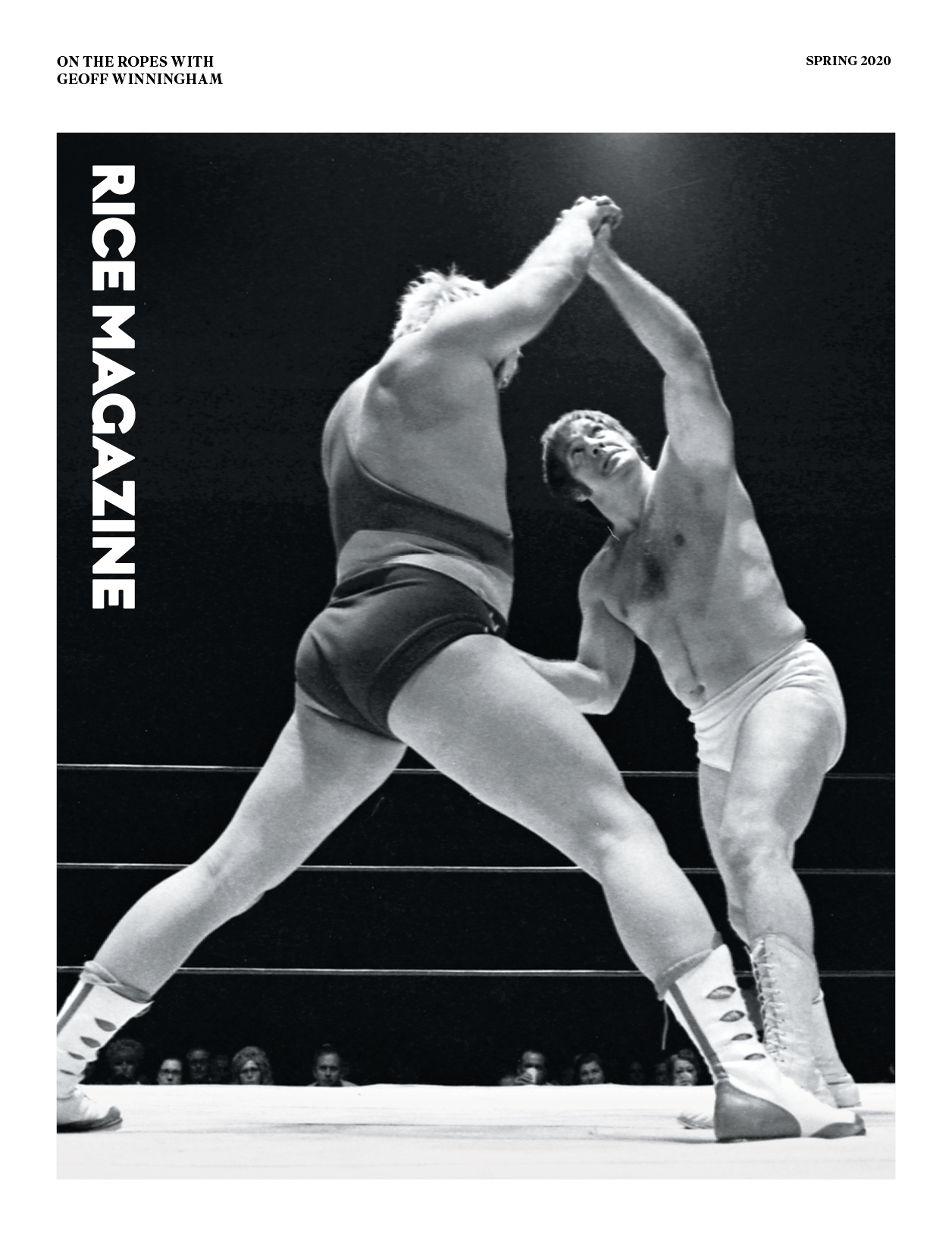