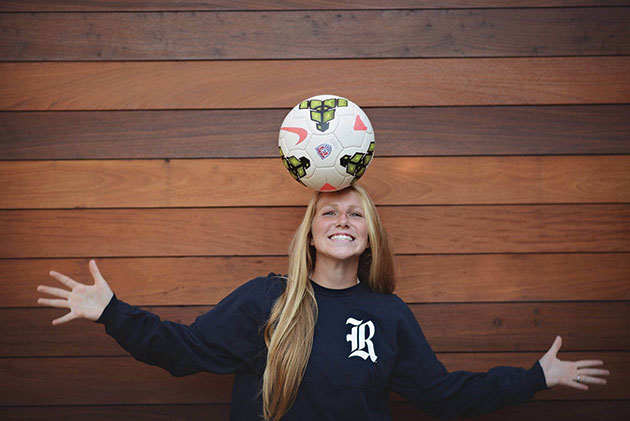 Before she even attends her first class this fall, Rice soccer player Erin Mikeska is already a part of a Rice University legacy — she’s the latest in a family line of talented, athletic Owls. Both her father, Shawn Mikeska ’87, and her uncle, Carl Mikeska ’85, were Rice baseball lettermen.

Shawn was a pitcher who finished his collegiate career with a 6-0 record and struck out 60 batters in 71.1 innings. Carl, his older brother, was a four-year letterman and a member of Baker College. He was a prominent player on the 1984 Rice team that finished second in the Southwest Conference.

At Elgin High School, Erin was named freshman of the year on the soccer team after scoring 16 goals and making 35 assists. A midfielder, she was a first-team, all-district player who led her team in goals scored.

When it came time to look at colleges, her father joined her on a campus visit, sharing some stories that she had never heard before and which made it clear he’d treasured his time at Rice. “I knew he would support me in whichever school I chose to attend,” said Erin. “But I also knew he would absolutely love it if I went to Rice.”

Erin ultimately chose Rice over Auburn, Texas Tech and others, but she became an Owl for her own reasons. “I couldn’t stop smiling while I was on my visit,” she said, noting the beauty of the campus and “dynamic of life” at Rice. Soccer coach Nicky Adams has reason to smile, too. “Erin leads through example with pure heart, work ethic and commitment.” — KAITLYN DUBOSE