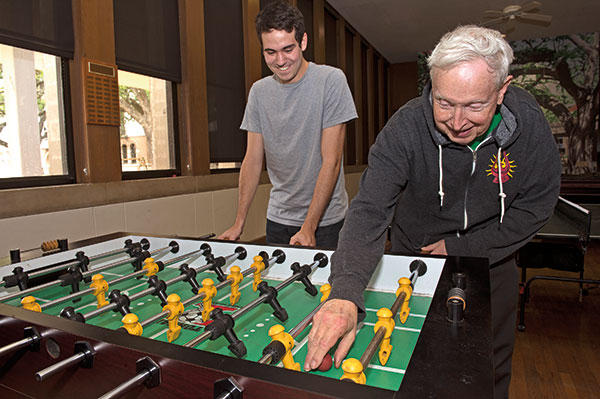 Glibert “Doc C” Cuthbertson plays foosball with a student in the Will Rice game room. Photo by Tommy LaVergne 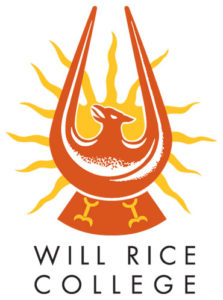 Will Rice College’s Beer Bike teams have had a good run in recent years. Will Rice is the only college to have simultaneously won the men’s, women’s and graduate students’ contests, and to have done so five times. In case the other colleges hadn’t noticed, the residents of Will Rice (which modestly bills itself as “the College of Gods and Goddesses”) began parading around campus three years ago with brooms. The Phoenix Raids, as they are known, are designed to “educate other colleges on how to properly sweep,” said Veronica Rae Saron ’14.

Indeed, Will Rice’s competitiveness runs deep. Edward “Neely” Atkinson ’75, a freshman at Will Rice in 1971 and currently a senior lecturer of statistics, recalled water balloon fights with adjacent colleges as “a year-round activity.” The fights were not particularly organized. “It was more, ‘I’m bored. Let’s go shoot some balloons at Lovett,’” he said.

These were not just your basic water balloon fights — this was advanced combat involving surgical tubing that could launch projectiles across quads. Eventually, Atkinson said, the balloons caused roof tile damage, and the practice was banned.

For many Will Ricers the game room is a second home — and a place to nurture their competitive spirits. Foosball competitions, in particular, have spawned such creatively named tactics as the “French guillotine shot” and the “crab nebula defense.” But perhaps the most archetypal is the “Doc shot,” in honor of Gilbert “Doc C” Cuthbertson, the legendary resident associate who has graced Will Rice for more than 50 years. “He has touched generations of Will Ricers,” said Derek Brown ’16.