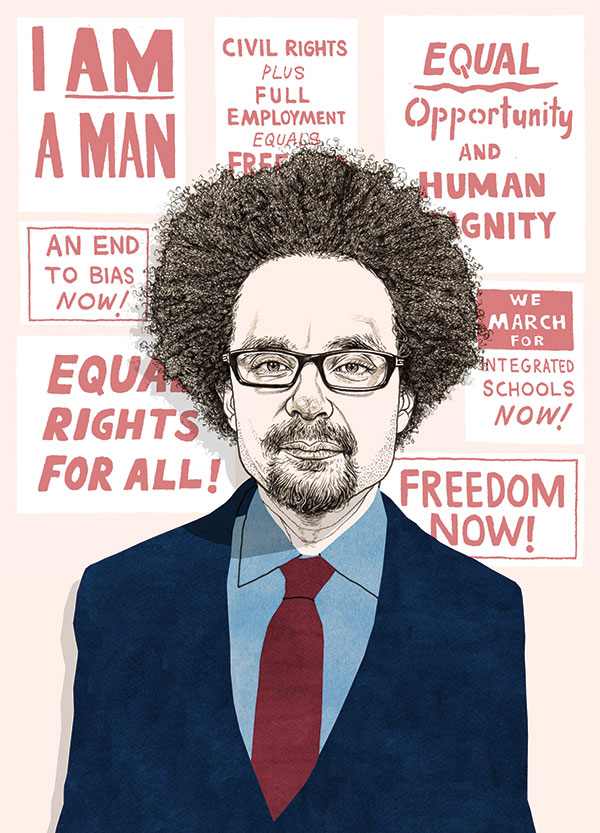 Alex Byrd ’90 knows Rice better than a lot of professors. Coming to the university from Houston’s historically black Jack Yates High School, Byrd wasn’t sure how he’d fit in when he matriculated in 1986. Three decades later, the history professor is a Rice institution in his own right; Dean of Humanities Nicolas Shumway once called him “the complete package: a great teacher, great student adviser and a really superb scholar.” He’s currently wrapping up his fifth year as the master of Wiess College.

“I’ve been a Rice student or a Rice faculty member longer than I’ve been almost anything else. Both my children were born while I was a resident associate at Baker College. I have a dear attachment to this place.”

I had history professors who made a mark on me starting as early as my first year at Rice. There was a visiting professor here named Julius Scott who taught a class on the history of the Civil Rights Movement. That was the first history class I took. So there were people who were role models for me before I knew I wanted to be a historian. John Boles ’65 wrote a particularly encouraging remark on a paper of mine, which said, “You should think about history as a career.” So I did.

When I took that class in Civil Rights history, it was clear to me that I was taking it to get an idea about how black history spoke to the opportunities that were available in America. It was a story about black struggle and ultimately about black revolution and success. That was the overarching theme: the way that African-American history had turned American history toward justice. For me, that was quite an inspiring story. And so, even the darkest aspects of black history that I study and teach have followed that arc. This may be less the case moving forward. In the 21st century, the things left undone from the black freedom struggle are so unrelentingly present that I don’t know what story arc has survived or remained. And that’s one of the things I am trying to figure out.

THE PERSONAL IS PROFESSORIAL

I have only ever researched topics that I have felt strongly about. My first book was about black migration in the late 18th century, and I felt really connected to

that as it spoke to the emigrant experience of African slaves, but it also spoke to the black migrant presence in an age that was critical to the origins of American society and politics. Now I am interested in how desegregation and neighborhood changes have affected education in the urban South. That is something I am very personally interested in. I have children who are in school in the urban South, and I see and feel acutely the success associated with desegregation, but also the failures.

We are in an age of tremendous opportunity in African-American history, but the challenge is the separation, or the potential separation, between African-Americans who have access to real educational, career and economic opportunities and those who have very limited access. I think we are in an age of inequality that has a potential to swing one of two ways. We can continue to exacerbate that inequality or we can attempt to address it.

BEING A LEADER IN RESIDENTIAL COLLEGES

I spent a good deal of time at Wiess thinking about how to use the masters house as a classroom, and thinking about what type of classroom it could be. We have done a series of African-American studies classes in the college that involve six to nine undergraduate students but also two graduate students.
I still teach physically out in the university. But it’s the college courses, and the integration of graduate training and undergraduate teaching in the college courses, that have been most special.

When I see someone who I think might be particularly good in this field, I try to capture them. I don’t know how successful I am, but I tell them, “Maybe you should consider an academic career.” The advice that worked best for me is, “If you can’t imagine yourself doing anything else, then you should probably be a college professor.”

It is bittersweet. I think five years is a perfect amount of time [to serve as a college master]. You need new ideas and fresh perspectives in the colleges. There are lots of things I’ll miss about it, but it will also be part of my experiences moving on and will continue to affect everything I do in the university.

During the final two years of his term as master of Wiess College, Alex Byrd convened a series of college courses at Wilson House (the Wiess masters house), each focused on various issues in African-American studies. “The opportunity to offer these courses in a residential college setting, with the kind of continuity and familiarity afforded by the college context, has been a highlight of my teaching career,” he said. Byrd recommends the following books from each course:

•  “Notes of a Native Son,” by James Baldwin

•  “Death of a Suburban Dream: Race and Schools in Compton, California,” by Emily E. Straus

•  “Song of Solomon,” by Toni Morrison