The Art of Science Fiction

The Art of Science Fiction

Dave Seeley '82 walked away from an award-winning career in architecture to explore the unknown — by imagining and drawing worlds of science fiction and fantasy. 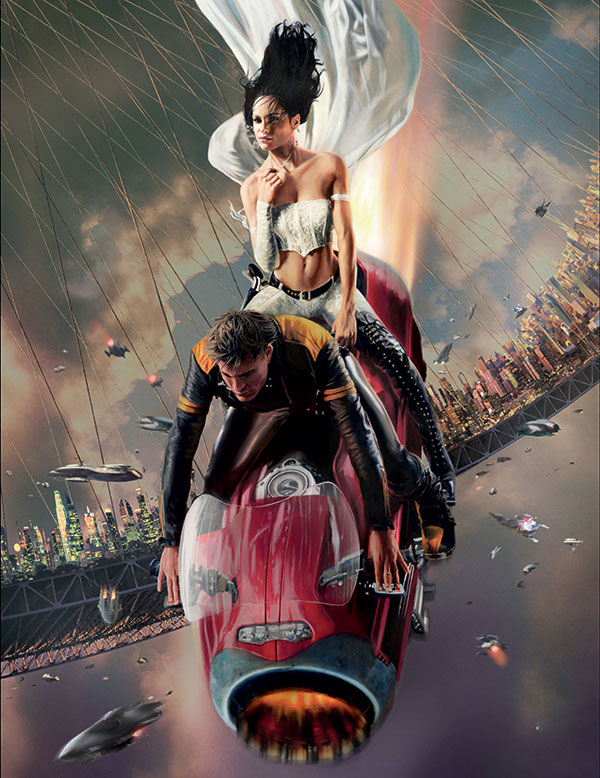 Dave Seeley ’82 has always been an artist — and a self-described science fiction fanboy. In his recent collection, “The Art of Dave Seeley,” he calls himself a lifelong “image junkie,” a collector of everything from airbrushed album covers to comic books, from fine art to fashion magazines to fantasy illustrations. 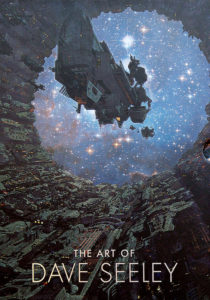 In elementary school, he impressed his classmates by filling notebooks with elaborate colored-pencil monsters. But he didn’t think “strong students” majored in art, so when he got to Rice, he applied himself to the more professional subject of architecture. Even here, however, surrounded by what Seeley called “the exotic cowboy culture of Houston,” he couldn’t stay away from comic book stores or the Montrose art shops that featured the kinds of airbrushed pop art he had grown up admiring.

After earning his bachelor’s degree in architecture, with a minor in art and art history, then a Bachelor of Architecture degree, he left Rice to practice architecture in his native Boston. There, he writes, “I reconnected with a beautiful and brilliant college classmate who’d come to Harvard for law school” — Linda Bosse ’83. Early on in “a romance that’s lasted 27 years,” Bosse recognized that Seeley needed more art in his life.

“One year, as a Christmas gift, she called my bluff and signed me up for a bronze-casting class,” Seeley recalled. “It was there that I realized my art-making itch needed some serious scratching. ”Seeley was as good at designing buildings as he had been at drawing monsters. He was the lead designer on several building projects that won national awards. But, as he’d begun to realize, his heart wasn’t quite in it. In the mid-1990s, following a prestigious architecture fellowship that financed a five-month, around-the-world trip for Seeley and his wife, he made a daring leap from the structured world of architecture into the realm of fantasy, beginning his second career as a professional illustrator with commissions for a series of role-playing and collectible card games.

Soon he was designing book jackets for science fiction and fantasy novels — including for one of the best-known and bestloved franchises of the genre: “Star Wars.” It was a homecoming of sorts for Seeley, who’d dreamed since the ’70s of seeing the view from inside the Millennium Falcon. Now, as an artist, he had the chance to explore that view by creating it. He describes the thrill of this opportunity in his book, in a chapter called “Star Wars,” which we’ve excerpted in the following pages. – Jennifer Latson 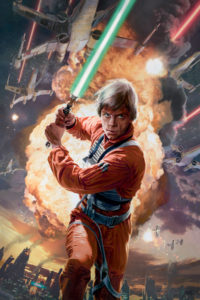 I can still feel the guttural rumble from back in 1977, when that glorious Star Destroyer cruised into view, leaving a profound impression on my teenage brain. I’d never seen anything to compare, and I was instantly hooked. The worlds, the pace, the characters, the drama — all seared into my psyche. “Star Wars” was the fìrst time I’d been able to immerse myself in a science fìction paradigm and take it entirely seriously. No nod and a wink, no farce. No suspension of disbelief. “Star Wars” shaped my interest and defìned an aesthetic direction.

Dave Stevenson at Del Rey Books was the art director in charge of commissioning “Star Wars” novel jackets. I’d cold-called Dave early in my art career and somehow managed to get connected to him. Even more surprising, he knew my work already, and he was able to give me advice on how to evolve it in order to be considered for book jacket commissions. After a couple of years with Shannon Associates, I picked up the Star Wars phone and left Dave a message about coming in to see him. A short while later he phoned back, saying, “Sure, come on in, I’ve got a job for you.” Wow. And that was the start of my work on “Star Wars.” 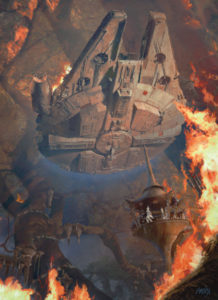 “The Burning of Kashyyyk”

My fìrst jacket was for a novel called “Rebel Dream” by Aaron Allston, featuring Wedge Antilles in the cockpit of his X-wing ìghter. [Editor’s Note: The character Wedge Antilles was a starìghter pilot who fought against the Galactic Empire. He and Luke Skywalker were the only survivors aöer the bale that destroyed the Death Star.]

I began researching Wedge and X-wings and was surprised to fìnd that, in certain areas, neither had a very clear visual defìnition. The relatively few images of Wedge (played by actor Denis Lawson) in the Lucasfìlm photo archives looked very different from shot to shot. The character appeared in relatively few frames in the fìlm and was usually helmeted. The X-wing exterior was featured heavily in the film, but views within the cockpit were most always front-on. So what did it look like off to one side? I was able to invent some aspects of control panels, and I also used Department of Defense photos of real fighter plane cockpits for ideas of what to show. It seemed important to expand on what we already knew about Wedge and his X-wing, and I was eager to add to the “Star Wars” canon. 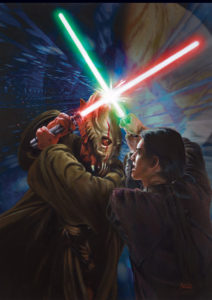 When I was commissioned to create the cover for the second book in Aaron’s duology, titled “Rebel Stand,” I chose to create a view from inside the Millennium Falcon that we hadn’t seen in the films. At this time, 3-D software was still in a fledgling state and not yet the tool that I’d choose for this kind of thing. Instead, I worked with a plastic model kit of the Falcon and invented my own crazy interior perspective, with a view out to the ship’s nose. That was a view that we hadn’t ever seen in the films.

Lucasfilm hosts a periodic convention called Star Wars Celebration. As part of the show, they offer their artists a license to create an image of their own choosing and make 250 large prints to sell at the convention. I accepted an invitation to Celebration IV in Los Angeles, during the 30th anniversary of “Star Wars Episode IV: A New Hope.” After the Han and Leia piece, I’d illustrated several new characters from the Expanded Universe novels, but I couldn’t resist the chance to create a classic character from the original trilogy. I went back and forth a bit at the outset, but in the end, I decided it had to be Luke.

For me, the coolest aspect of Luke in the movies was his incarnation as an ace fighter pilot. I decided to show Luke in the period following the conclusion of “Return of the Jedi,” when he and his Rogue Squadron of X-wing fighters take on the job of rooting out the entrenched Empire from the galaxy. 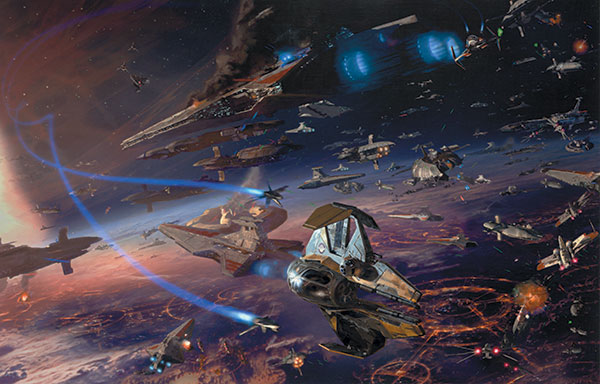 “The Battle of Coruscant”

Prior to the convention, I emailed the finished image, called “Rogue Leader,” to Dave Stevenson, thinking that he should have first crack at it, given that he was the reason I was working in the “Star Wars” universe in the first place. Dave immediately emailed me back saying he thought he might have the perfect book for it, which later turned out to be “Luke Skywalker and the Shadows of Mindor.”

When Lucasfilm announced it as the cover image, fans on the message boards seemed pretty stoked, except for those who were disappointed that the villain of the book, Lord Shadowspawn, wouldn’t be on the cover. I picked up the phone and gave Dave another call. What if we flipped our point of view 180 degrees when we flipped the book over and saw what Luke saw — Lord Shadowspawn, an instant before their lightsabers collided? … I found it particularly satisfying to flesh out this spectacular villain. Shadowspawn was a character who had not yet been seen in any detail, so I was able to design him with some degree of latitude. I went for a Revolutionary War general/pirate/ninja combination, but the finishing touch was Dave Stevenson’s suggestion to add his white facial tattoo.

My favorite scene in all of the films is the opening Battle of Coruscant sequence from “Star Wars Episode III: Revenge of the Sith,” so when I was offered the chance to create an illustration for “Star Wars: The Essential Guide to Warfare,” I was ecstatic.

The illustration had to feature both Anakin and Obi-Wan, and fortunately for me, the movie scene itself was a perfect reference as it documents their movements through the battle in exacting detail. Again, I wanted a compelling composition that used a point of view that we hadn’t seen in the film. Ultimately, I chose to feature Anakin in his starfighter, its wings opened for baóle, as he evaded Buzzdroid missiles by spiraling them into self detonation.

“Star Wars” has been a profound inèuence on me artistically, and it defined my early aesthetic vision for science fiction. What’s more, the prequel trilogy was neatly aimed at my son’s generation, so I was able to live those movies and relive the original movies through his eyes during the creation of my “Star Wars” illustrations. While I’m very glad I’ve been able to enjoy a wide variety of projects in my career, I’m thrilled to have been a part of creating the “Star Wars” universe.

All images courtesy of Dave Seeley