When you survey the cliffs overlooking the Llano River in Central Texas, it’s hard to imagine that they were underwater a half-billion years ago and formed part of the North American coastline during the Upper Cambrian era. But that’s what brought Rice marine geologist André Droxler and his team of researchers to a rare land-based expedition.

Droxler has spent most of his career studying the evolution of deep ocean environments, from Belize to the Maldives and the Great Barrier Reef.

“I never thought you could discover something on land,” he said. “To discover something in the middle of Texas, it’s pretty exciting.” According to Droxler, the Eagle Ridge Ranch in Mason County near Fredericksburg has some of the best outcrops in the world containing fossilized prehistoric bacteria and microbes. He believes these microbial reefs contained the first forms of life on Earth.

Droxler’s team was granted access to the land after working with Woodlands resident Donald Shepard and his wife, Rose, who own the ranch. The professor of Earth science also secured funding from four major oil companies that had interest in microbial reef research.

Since 2012, the Rice professor and his graduate students have made many trips to Mason County, drilled more than 150 core samples and virtually mapped the area using a drone. Droxler said the three summers here “have been some of the happiest summers I have had in my life,” and he returns with the same excitement as the first time he paddled down the Llano River in search of half-billion-year-old “time capsules.”

These findings appeared in the Winter 2016 magazine.

Bikes are for fun
Sun Belt residents are most likely to use bike-share programs for recreation, compared with users in the Midwest or Northeast, who regularly use the same programs for their daily commute, according to researchers at Rice’s Kinder Institute for Urban Research.

Bike-share systems are a growing part of the transportation options and recreational landscape of many cities. They place rentable bikes at a network of kiosks with bike docks and pay stations across a city. At most hours of the day, users can check out and return bikes from any kiosk.

The researchers grouped bike trips into four categories: weekday two-location (starting and ending at different kiosk locations), weekend two-location, weekday round-trip and weekend round-trip. In all four cities studied — Austin, Fort Worth, Houston and Denver — the overwhelming majority of kiosks generated more two-location trips than round-trips. And in all four systems, round-trip activity was concentrated at a handful of kiosks located in parks or along bike trails.

“Recent discussions of bike sharing have focused on the large systems in Northeastern and Midwestern cities and tend to emphasize bike sharing as convenient means of commuting to work,” said Kyle Shelton, a postdoctoral research fellow at the Kinder Institute and the study’s co-author. “While riders in Sun Belt cities make trips for a variety of purposes, including commuting, many riders — especially in the Texas cities — use bike share for recreation. Many of these kiosks near parks or bike trails are among the most heavily used stations in all four cities.” ricemagazine.info/316

Convict leasing
A Rice archivist, a history professor and students working with the Rice Center for Civic Leadership teamed up with a Sugar Land community activist to document the practice of convict leasing — a little-known aspect of slavery’s historical legacy in Texas.

“The first steps toward convict leasing in Texas happened right at the end of the Civil War and right at the moment of emancipation,” said Lora Wildenthal, professor of history and associate dean of humanities at Rice. “There was really no gap in time. Slavery, for some people, moved or passed right into convict leasing.”

In 2014, Reginald Moore, founder and head of the Texas Slave Descendants Society, contacted Wildenthal to discuss the work that he and others in the society were doing to raise public awareness about the relatively unknown history of convict leasing in Fort Bend County and in Texas more generally.

“The provision in the Emancipation Proclamation said that slavery or forced labor was only possible if a person had been convicted of a crime,” Wildenthal said. A system called convict leasing was developed, in which an individual, usually an African-American man, would be convicted of a crime and sentenced to labor. Convict leasing wasn’t abolished until the early 20th century.

“When the convict-lease system started here in Texas in 1867, it was an atrocity how they treated those individuals,” Moore said of his motivation to research the issue and begin assembling a collection. “I just wanted to tell that story.”

No lens? No problem
How thin can a camera be? Very, say Rice researchers who have developed and patented prototypes of a technological breakthrough dubbed FlatCam.

Invented by the Rice labs of electrical and computer engineers Richard Baraniuk and Ashok Veeraraghavan, the device is little more than a thin sensor chip with a mask that replaces the lenses of a traditional camera. Algorithms process what the sensor detects and convert the sensor measurements into images and videos.

Traditional cameras are shrinking, driven by their widespread adoption in smartphones. But they all require lenses — and the post-fabrication assembly required to integrate lenses into cameras raises their cost, according to the researchers. FlatCam does away with those issues in a camera that is also thin and flexible enough to do things that traditional devices can’t.

FlatCams may find use in security or disaster-relief applications and as flexible, foldable, wearable and even disposable cameras, Veeraraghavan said.

FlatCam shares its heritage with pinhole cameras, but instead of a single hole, it features a grid-like coded mask positioned very close to the sensor. Each aperture allows a slightly different set of light data to reach the sensor. Raw data sent to the back-end processor — for now, a desktop computer — is sorted into an image. As in much larger light-field cameras, the picture can be focused to different depths after the data is collected.

Samantha Paulsen, a bioengineering graduate student in Jordan Miller’s lab at Rice University, holds a plate on which several 3-D-printed silicone constructs have been mounted.

Sweet scaffold for blood vessels
Using sugar, silicone and a 3-D printer, a team of bioengineers at Rice and surgeons at the University of Pennsylvania may have overcome one of the biggest challenges in regenerative medicine: How to deliver oxygen and nutrients to the cells in an artificial organ or tissue implant that takes days or weeks to grow in the lab before a surgery.

A research team led by Jordan Miller, assistant professor of bioengineering at Rice, and Pavan Atluri, assistant professor of surgery at Penn, created an implant with an intricate network of blood vessels that bodes well for future lab-grown tissues and organs. The study showed that blood flowed normally through test implants that were surgically connected to native blood vessels.

Tissue engineers have typically relied on the body’s own ability to grow blood vessels — for example, by implanting engineered tissue scaffolds inside the body and waiting for blood vessels from nearby tissues to spread to the engineered constructs. Miller said that process can take weeks, and cells deep inside the constructs often starve or die from lack of oxygen while awaiting slow-approaching blood vessels.

“We wondered if there were a way to implant a 3-D printed construct where we could connect host arteries directly to the construct and get perfusion immediately,” Miller said. “In this study, we are taking the first step toward applying an analogy from transplant surgery to 3-D printed constructs we make in the lab.”

It’s a technique Miller pioneered in 2012 — and it’s inspired by the intricate sugar cages pastry chefs create to garnish desserts.

Using an open-source 3-D printer that lays down individual filaments of sugar one layer at a time, the researchers printed a lattice of would-be blood vessels. Once the sugar hardened, they placed it in a mold, poured in silicone gel and dissolved the sugar, leaving behind a network of small channels in the silicone. A John S. Dunn Collaborative Research Award supported the research.

PSYCHOLOGY
Weighty matters
It’s an American paradox: While more of us are becoming obese — one-third of U.S. adults — discrimination against heavy people is growing nearly as quickly. Surveys show that overweight people are judged to be less hardworking, less attractive and less conscientious. They are more likely to be discriminated against in health care, interpersonal relationships and the workplace.

Obesity research has tended to focus on overweight women, but overweight men face serious prejudice too, according to recent research by Mikki Hebl, a professor at Rice’s Jones Graduate School of Business, and two co-authors. To measure that prejudice in the workplace, Hebl and her colleagues launched a novel study at a mall in a large southern city.

Using formal training and memorized scripts, the men went to 112 stores pretending to apply for a job, and 111 stores where they headed to the center of a store and waited for service. If no employee approached, the faux-shoppers followed a script in which they sought an employee, asked for help buying a present and then asked for a second recommendation.

The results? Whether asking for jobs or customer service, the subjects faced no weight-related difference in what is called formal treatment: overt and illegal actions such as giving unequal access to resources. But when the “heavy” men applied for jobs, they faced far worse interpersonal treatment than they received without prosthetics: that is, subtle behaviors such as hostility that aren’t illegal, but can still drive off workers and clients. Hebl is the Martha and Henry Malcolm Lovett Chair of Psychology and a professor of psychology and management. 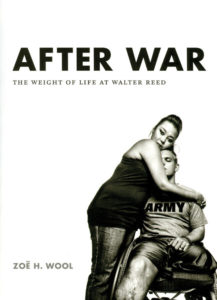 Wool follows the stories of American soldiers who were severely injured in the Iraq and Afghanistan wars. Between 2007 and 2008, she spent time with the soldiers and their families at the Walter Reed Army Medical Center in D.C. Her goal was to understand and document the challenges they faced in transitioning from unspeakable trauma back to ordinary civilian life. Wool contextualizes their experiences within a broader political and moral framework.